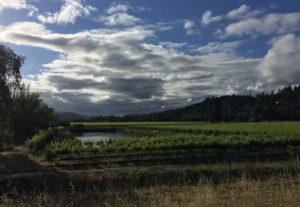 This is the view I see when I walk the dog. Welcome to the ‘hood.

Would this landscape fuel your creativity? Disengage your writer’s block? Inspire your imagination to romp freely? Send story-telling shivers up and down your spine?

It does for me, at least enough to have transformed me from a vaguely-wannabe-author to somebody who writes every day, with a few published stories under my belt, some very encouraging awards, and a novel with its fourth draft in progress, all within the less than two years since I moved here to Napa Valley.

There’s got to be something in the air here in NorCal. Literary legends have mined the magic that wreathes our mountains and the vineyard-quilted valleys

Perhaps not the best thing he ever wrote, but it does reference wine.

St. Helena, my cherished little adopted town here in northern Napa Valley, happily lays claim to Robert Louis Stevenson. We have a school named after him and a small museum devoted to him, annexed to our excellent town library. RLS, as we fondly call him, spent the summer of 1880 honeymooning with his bride Fanny in a cabin on the slopes of Mount St. Helena (oh, and her son Lloyd was along too; seems Fanny had ditched her first, philandering husband, and RLS was a man of a refreshingly progressive turn of mind in such matters).

He immortalized their idyll in The Silverado Squatters. I confess I haven’t read it, but it’s on my list. Local pride.

It must be admitted that R.L. Stevenson’s St. Helena period amounted only to a few months (and one book) out of a life that was astoundingly creative, peripatetic, and short. This, after all, is the guy who gave the world Kidnapped and Treasure Island and The Strange Case of Dr. Jekyll and Mr. Hyde, to mention only some of his most famous work. He wrote memoir and newspaper articles. He wrote delightful poetry, some of which formed part of the bedrock of children’s literature. I grew up with a vintage copy of A Child’s Garden of Verses, which I cherish to this day.

This is also a man who, despite and sometimes because of the life-long illness that plagued him, traveled back and forth from his native Scotland to England and France, and then across the still pretty wild and crazy American continent to California, back again to Scotland and then to the South Seas. Meanwhile he ping-ponged from cherished son of a well-heeled family of engineers (they designed and built lighthouses, how cool is that?) to starving artist to reluctant law student who passed the Scottish bar but never practiced to best-selling, legend-in-his-own-time author and one of the greatest story-tellers in the English language.

And he died at the age of forty-four. This was a man who knew how to carpe every single diem that was given to him.

My husband and I have made the hike several times up the trail to the site of R.L. and Fanny’s (oh, and Lloyd’s . . . that must have been a little awkward) honeymoon cabin. It’s a beautiful hike but a rocky and steep one, beginning at a trailhead reached by driving a fair distance up into the hills. In a modern car, may I point out, on a nicely paved road. This was no cushy all-inclusive spa that RLS and his bride chose to initiate their marriage.

All that remains today is a small clearing and a rough obelisk with a tarnished brass plaque. You have to imagine the cabin itself, and in these drought-stricken days you also have to imagine the rushing stream that ran nearby. It’s easy to see, though, that whatever the love nest’s charms were, it wasn’t roomy. And it was seriously remote. Running out for a pint of half and half or a bottle of Cabernet was out of the question.

Which leads me to conclude a few things:

It may be only romantic speculation that there are some fortunate spots on the globe that feed the creative spirit, ones that are more likely than others to attract the Muse and conjure untold tales into being. But isn’t romantic speculation what gave us Treasure Island, after all?

And don’t even get me started on Jack London, just down the road there in Glen Ellen. He’s a subject for another time.
What about you, my literature-loving friend? Is there a locale that calls to you, one that your creative nature recognizes as home ground? By all means, share! 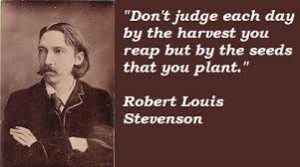