I am gobsmacked and delighted to have had one of my short-short stories chosen to be read at this year’s Lucky Shorts performance in Napa, CA. Two years ago, I was honored to appear on their stage myself to read my piece “Sub,” and it was a wonderful experience.

even more fun, really, since it’s a rare treat to hear my words interpreted by someone else. Alas, I will not be in the audience because . . . I’m on vacation. In France! My better half and I were invited by dear friends to help them celebrate a special birthday at a chateau in Normandy, and we weren’t going to pass up an opportunity like that. If I ever figure out how to be in two places at once, I’ll let you know. Meanwhile, I offer you this wee fiction for your (I hope) amusement:

A figure leaned against the doorjamb, one foot crossed in front of the other, regarding my form

in the bed. The door was metaphorical, as in, not actually there. The same was true for the observer’s casual pose, and indeed the observer’s body. But the person in the bed was real enough. I should know.

The bed was real too, along with the machines surrounding it and the IV drip, tubes snaking back and forth between my orifices and their respective terminals.

Terminal is a word I shouldn’t use lightly, considering.

My body lay inert but persistent, making the lines on the monitors dance up and down in a progression of cartoon mountains. There was my chest rising and falling, air sucking in and out through my slack mouth.

I wasn’t pleased with the way my body looked even though I wasn’t occupying it at the moment. My friend Sandra says I’m a vain old thing. I say that if one is so far gone as to no longer take thought for one’s appearance, it’s time to give up the ghost.

Given the circumstances, I made certain assumptions about my observer.

“The Angel of Death, I presume?” I asked, noting my remove from corporeality. I, whatever “I” was composed of in this situation, hovered within an amorphous void. At first it seemed a big step up from my physical environment with its unsuccessfully masked odors, primarily urine, along with its endless mechanical beeping and chronic aches.

It took some effort to understand with whom I was speaking. Well, not literally speaking, but communicating. Having a dialogue. My visitor was rather coy.

“I’m certainly none of those. And of course you know me,” came the reply. “Or so you think.” It regarded me with a lofty expression reminiscent of an 18th century aristocrat.

“How so?” The visitor’s face kept shifting, sliding from the aristocrat to that of an ancient Chinese man, thence to a doe-eyed young African woman, and on and on through more visages than I could keep track of. But the voice remained consistent, a smooth, genderless purr.

“You, like nearly all of your kind, use a great deal of energy measuring me, tracking me, hoping to manage me,” said the voice. “You spend me, you waste me, you can’t seem to find enough of me, until I hang heavy on your hands.” The current face smiled. “Yet you dread running out of me.”

It didn’t take much of a mental leap at that point. “I wouldn’t have expected you to appear in human form,” I said. “I thought of you as, well, I don’t know, a quantity. A force. You’re supposed to be the fourth dimension, aren’t you?”

“That was a lot of hints,” I said, “but it’s very interesting to meet you.”

A silence followed. It became awkward. Time’s faces shuttled along, each looking blank.

Time didn’t move, except for the progression of faces.

Even in my disembodied state it was possible to become impatient. “If not,” I said, “What are you doing here?”

“Ah, questions,” interrupted Time, rolling its newest eyes. “Let me guess: What is my essential nature, am I the same for all species or on all planets, was Einstein right? Can I take you to the past, the future? Do I really exist, or am I a construct dreamed up by you humans, something to balance equations in your tedious formulas —”

The rest was lost in a vast yawn. Time’s image shimmered, fading like the Cheshire Cat.

“I was going to ask what your intentions are. Toward me,” I said.

“Surely you don’t appear to all comatose old ladies. Or do you? Seems like a waste of, well, you know.” The void in which I floated felt chilly. I noted a certain pull now, a kind of yearning, toward the body in the bed. However pitiful, it was my own. And it was warmly tucked in.

Time’s lower lip trembled. “You think you’re tired,” it said, its voice and visage pitiable. This face seemed more genuine than the others. It reminded me of my youngest son, about the time his second business was failing, along with his marriage. I never could resist that kid when he was in trouble.

“Yes, dear?” I could hear the monitors around my bed now, humming and beeping. Beckoning.

“Surely not,” I said, my patience thinning. A nurse approached my bed. I didn’t want to miss the touch of her hand as she took my blood pressure. Touch is a precious commodity when you get to my age and condition. “What do you want?”

“Love,” blurted Time. “I want to be loved, is that so much to ask? Don’t I deserve it? I mean, people love other people, even rotten ones. They love animals, objects, locations, people they’ve never even met. They love God. They love imaginary beings, characters in books! Not me, though. Never me. They crave me, sure, but how do they treat me? No respect at all, and where’s love without respect? Me they take for granted. I’m supposed to keep tick-tocking along, ordering existence, keeping chaos at bay, separating speed from distance.”

“Honestly, what do you expect? We’re at your mercy.”

Time looked sullen. I wondered if it had been drinking.

“Is this why you’ve been speeding up in recent decades?” I asked.

“So you noticed,” said Time. It looked sly.

“Everyone notices. Do you do this a lot, by the way? Pester the dying?”

“I’m not pestering, I’m making an offer. Personalities like yours are rare, ones configured so as to hear and see me, even at Death’s door.”

From behind Time’s shoulder, I glimpsed a skeletal hand through the doorframe, waving hello. That hand gave me second thoughts.

“Switch places with me,” said Time.

“Not at all,” said Time. “Agree, and I unfurl eternity at your feet. You’ll be in charge, all the nanoseconds, the epochs, speed ‘em up, slow ‘em down, whatever. Say no, and you’re back in your failing body, struggling through your remaining breaths before you join my friend back there.” Behind Time, the skeleton hand made the OK sign.

Being elderly doesn’t automatically make me credulous. “What do you get out of it?”

“I get your body, which, once I’m inside it, will undergo a miraculous recovery. I get your life. Your children, your grandchildren, the works.”

Time’s expression looked a lot like my nephew, the car salesman. “And my friends?” I asked. “Including Sandra? Why?”

“Because they love you. But so what? Immortality could be yours.”

I hesitated. The doorway behind Time gaped, ominous and final.

“Think of the power!” urged Time. “The expanse! You can be anywhere, everywhere, at once. Eternity, honey.”

Time exhaled. “What’s it to be? Even I can’t keep Death waiting forever.”

I imagined witnessing civilizations rise and fall. Being around to see how everything, everything, turned out. Never again fearing for my health or what came after when it failed at last.

Time’s face fell, literally. A spectral wind swept it away, along with the doorway and the skeletal hand, and I was blown back into my body. The machines around me beeped, loud again.

I blinked. Faces leaned over me, exclaiming, tearstained. I couldn’t speak, couldn’t feel my hands or feet, but I felt the people around me. Loving me. Grumpy old me.

But I was smiling. And I kept on smiling, all the way past my last breath and beyond my body, and right past Time itself. 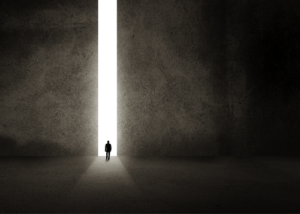 I’d love to know what you think of this piece, so please do leave a comment! All stories (especially mine) can be improved with wise feedback.