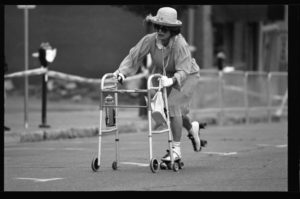 Bing Bing is the name my husband and I gave to the skilled nursing facility where he was an inmate, I mean patient, for nine very long days following his cycling accident (see Navigating the Upside Down if you missed last week’s episode). We named the place Bing Bing after the call button alarm that goes off continuously, all day and all night, like a drip of water landing on the forehead of a torture victim just continuously enough to bring about full confession to anything, anything at all, to make it stop.

Husband is home now, and we are staggering with gratitude. That is, I am staggering: he’s not ambulatory enough yet to produce a respectable stagger. But he’s on his way, and making excellent progress.

With him came two new additions to our small house: a cane with a four-pronged tip (we haven’t settled on a first name for it; we vacillate among Sugar, Citizen, or considering the season, Candy) and a full-sized wheelchair. The Chair is as yet unnamed, and is likely to remain so. It has plenty of presence as it is. It is a useful and necessary device, sturdy and well-designed, and it’s not it’s fault that it takes up so much room in our compact domicile.

On Day One of Husband’s return, I found myself hemmed into a corner of the master bathroom by my The Chair, from which Husband was sorting through a cabinet.

“Ahem,” I said. I said it gently, recalling how grateful I am to have him home.

“I’m trying to find the mouthwash,” he replied. Admirably, he is determined to do as much for himself as possible.

“I understand. But I would like to not be standing in this corner.”

“Too bad! You wanted me home.”

I did indeed, and I do indeed. I am 100% thrilled to have him back, and no less so with the accompaniment of  The Chair and Candy Cane.

The crack in the hip socket means he has to keep weight off of his right leg for another, oh, five weeks. And since it’s his right collarbone that is also broken and can’t bear weight, The Chair and Candy Cane will be with us until approximately mid-January. That’s OK; there’s no place like home for the holidays.

Husband’s spirits are very good, considering how frustrating it is to require a rolling rig simply to locomote around the house, while having his right arm in a sling. He has his less-than-cheery moments, and who can blame him? And yet. A passing neighbor, aware of his accident, warmly inquired after him while she was strolling past our deck yesterday. I made some comment about The Chair.

“Yep, I know all about wheelchair life,” she said cheerily. “At least your husband’s getting out. Mine’s been in one for the past fifteen years.”

The universe has a way of spontaneously adjusting one’s perspective. Again, I am staggering with gratitude. I already have what I wanted for Christmas.

How about you? What resets your point of view? Please share, and meanwhile, wishing you a happy and abundantly healthy holiday season!

Previous Posts for your Future Education