Weddings are a perfect laboratory to test both the flexibility and endurance of ritual. As untraditional as a wedding may be — think of the wonky ones you see on the news in

which people tie the knot while skydiving or swimming with dolphins — it will contain certain actions performed in a certain order. Two people, in a combination of genders that is entirely up to the couple, appear before an officiant (usually human, although robots are trending) and express their commitment to one another in front of witnesses, in a manner that is both legally and socially recognized. These elements must be present, even if it means the witnesses have to don parachutes or wetsuits. Otherwise it’s just a party. 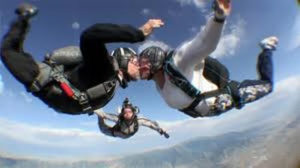 Rituals inform our lives with meaning, comfort, and sometimes mystery. Beyond mere habits, they put us in touch with something larger than ourselves, something communal and perhaps universal.

This wedding was outdoors, on a glorious October afternoon in a tree-shaded garden.  Besides the wedding party and guests, it was attended by a couple of gray squirrels who suspended their acorn gathering to observe the festivities before scampering off to bury their treasures. Being squirrels, they will only find a small fraction of whatever they stash, which makes their incessant food-interring appear to be something of a compulsion and rather inefficient. However, from a forest’s perspective it’s a win-win, since the nuts and seeds the squirrels don’t find will germinate, thus producing baby forests. 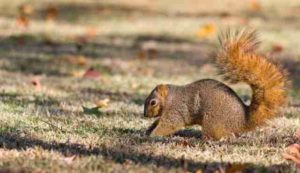 Ergo, it’s a repeated activity, handed down from generation to generation, that has a larger purpose. A ritual, you could say.

A family friend and close neighbor had hitched a ride to the wedding with us. Our passenger slept for most of the way home, so I had rather a long time to think about this. Just how universal an attribute is ritual? Is it even exclusively human?

Depends, of course, on how you define your terms. But if you’re willing to accept my

loose parameters, animals clearly have rituals of their own. You might think first of courtship behavior, which in some species  ranges from elaborate to bizarre. Male gentoo penguins search for just the right rock to present to a female; if she accepts it, he’s in. Sounds familiar, actually.

Bower birds spend immense energy building little houses out of twigs, and then decorating the structures with blue things: blue shells, blue feathers, blue rocks, blue plastic bottle caps, whatever, all to attract the attention of a female — even though the twig house has no practical value as a nest. Apparently lady bower birds have a thing for how the right shade of blue sets off a pile of twigs. 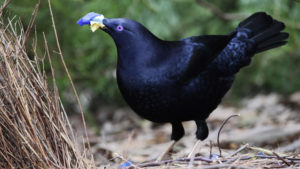 Gibbons sing and seahorses dance and eagles perform aerial acrobatics, and on it goes. Don’t even get me started on sea slugs, one species of which tries to stab their partner in the brain with their, um, penile stylet.

More compelling perhaps are the ways in which some animals respond to death. Dolphins 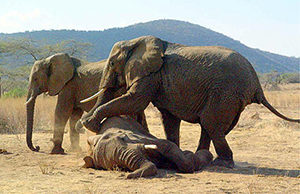 have been observed guarding the bodies of dead dolphins; chimpanzee mothers whose offspring die may carry the corpse with them for days or even weeks, grooming it until it is unrecognizable, while the other chimps in the group appear to respect her grieving. Elephants carry out solemn observances, including visitation of the body by family groups unrelated to the deceased.

Naysayers will dismiss these behaviors as mere pattern behavior. Those of us who live with animals know better and are well aware of their capacity for rituals, which usually

involve us. Your cat may expect you to sit on the couch in a certain position at a certain time every evening, lest you disrupt kitty’s sense of decorum and thus cause offense. Your puppy requires you to watch as he runs circles in the living room immediately after his bath. And if you have pets, it’s almost certain that you are the object of one or more greeting ceremonies.

Molly, our dog, is passionate about her role as house greeter. House guardian, not so much; if it’s past her bedtime, a crowd of peg-legged axe murderers could storm through our front door and she’d wait until morning to check it out. But if we return home during her waking hours, whether we’ve been gone five minutes or all day, we are recipients of The Bunny Greeting. 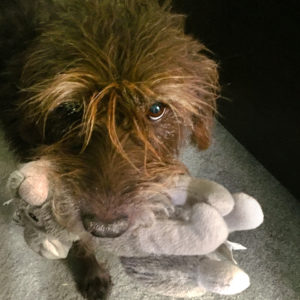 It has to be the bunny; her other toys don’t have the same impact, apparently. She has to hold it in her mouth and stalk solemnly toward us, while at the same time emitting a throaty rumble and furiously wagging her tail. Our role is to praise and exclaim. Thus our passage from the outer world across the threshold of home and hearth is properly observed, and life can proceed in harmony. 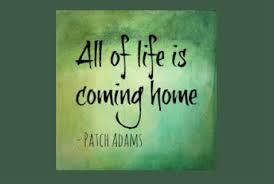 OK, maybe it’s a Pavlovian thing. And I’m not saying it approaches the significance of wedding vows. But it is certainly comforting, and my description does not do it justice. Like all rituals, it requires actual participation to fully appreciate. Just trust me on this: once you’ve had The Bunny Greeting, you know you’re home