When good friends decide to celebrate a major birthday by renting out an entire chateau in Normandy and invite you to the party, the only answer is an enthusiastic “oui!”. Due to my work schedule I couldn’t spare more than a week away, but we figured 7 days in France is 100% better than zero days in France. 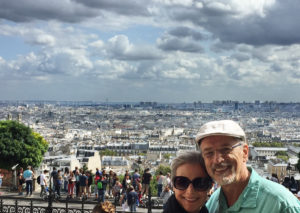 the view of Paris from Sacre Couer

And boy howdy, were we right. The first four nights of our trip were spent at the chateau just outside the small town of Villers-Bocage, about a half-hour from Normandy’s capital city of Caen and an hour from the famous D-Day beaches. Here’s what the chateau looks like from the air:

And here’s what it looks like from the front (excuse the particularly cheesy selfie, but we had to get this far away from the place to get the whole house in the picture). 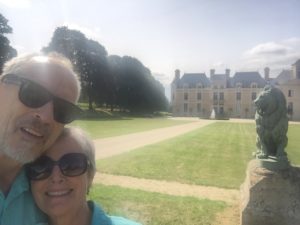 We’re talking full-on 17th & 18th century French splendor, with inlaid stone floors and massive fireplaces and crystal chandeliers and paneling everywhere — as well as 17 bedrooms all with en suite bathrooms, fully modernized. It was like first-class time travel with modern plumbing. I felt as though I should be wearing a corset, panniers, and a powdered wig instead of American tourist garb, which as you can see clashes dreadfully with the drawing-room decor. 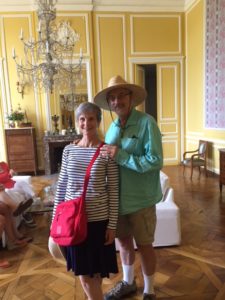 A merry crew of our friends’ friends, about 35 in all (the place sleeps 37), including some delightful children and one dog, spent the days independently. Some enjoyed the estate during the day, swimming in either the indoor or the outdoor pool or strolling the grounds. Others of us went sight seeing or explored the nearby villages. 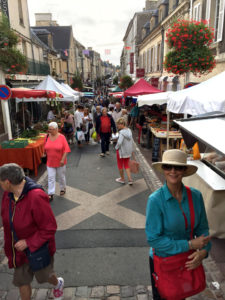 In the evenings we all gathered for aperitifs and long, leisurely dinners around the dining room’s capacious table in. On the guest of honor’s actual birthday, caterers arrived to prepare and serve a five-course repast, paired of course with appropriate 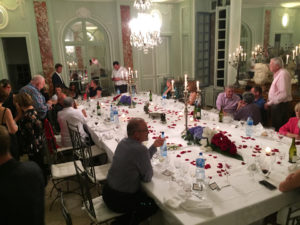 wines. It would have been gauche to take pics of the food under the circumstances, and anyway I was too busy eating. Trust me, it was divine. Just the thought of the hors d’oeuvres makes my mouth water with fond memories (foie gras, anyone?). No, I don’t have pictures of the food. I was busy eating it.

About half of the attendees were American, the rest French. As I’ve experienced before in France, the Gallic approach to life, with its whole-hearted embrace of celebrating food and drink and taking plenty of time with both, has a lot to teach us hurried, goal-obsessed Yanks about how to live. You could see the Americans practically melting with relaxation and enjoyment. And it didn’t kill any of us to wait until 9PM to eat dinner.

Although now that I’m home, I really do have to back off on the cheese consumption. 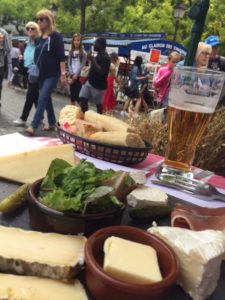 Another lesson from the French? The ones we hung out with were all people with good jobs. Successful. But they don’t obsess about work; in fact they don’t even talk much about it, even those with prestigious-sounding titles. Work is for work 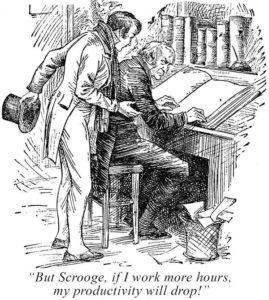 hours. The rest of the time is for life. Our French friends properly regard the paltry American idea of vacation time — two  measly weeks a year, oh mon dieu — as inhumane, and our national penchant for working ourselves into a constant lather as a form of mass pathology. I checked it out: the average French worker clocks about 1500 hours a year on the job and can count on 30 days paid vacation. For Americans, it’s closer to 2,000 hours at work with 14 paid days off if your employer feels like offering it and you don’t feel undue pressure not to take it, since unlike every other nation in the industrialized West, there is no law in the U.S. that says the boss has to give you any vacay at all.

Also, the French take lunch. They take two hours of lunch. You don’t see them slurping down a Cup’o’Noodles at their desk, trying to catch up on emails before the next round of meetings. You may be in the middle of a touristy town like Bayeaux, but if it’s between noon and two you may as well forget about buying tchotchkes or taking in a museum. Everybody’s at lunch.

And yet the French are some of the most productive workers in the world. Hm. Could there be a connection between taking quality time and doing quality work?

One lesson from France is so glaringly obvious I hesitate to mention it: Paris. Paris is the city other cities want to be when they grow up. Other cities should go to Paris to study how to be a city: how to seamlessly blend glory with grit, glamour with  grunge in just the right proportions to be endlessly fascinating. We only spent two nights there on this trip, a mere aperitif, and we’re already looking at Air BnB’s for the next visit. There are other cities I love: Rome, London, Istanbul, and my home town of San Francisco — but there’s nothing quite like Paris. 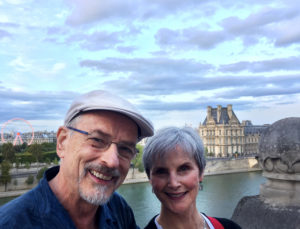 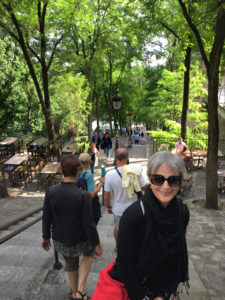 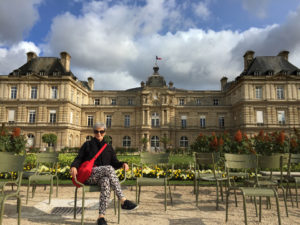 from atop the Musee d’Orsay, the stairway to Montmartre, the Luxembourg Palace 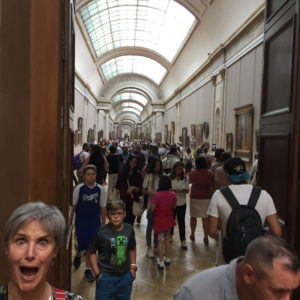 Can you find the Mona Lisa?

But the French lesson that will stay with me the longest after this trip has to do with the U.S. After the past 21 months of ricocheting between alarm and horror at the nature of our leadership and public discourse, my pride in my native land was at a fairly low ebb. My husband and I half-joked about trying to pass ourselves off as Canadians. So it was a gift from the universe when we made an unplanned visit to the American Cemetery at Omaha Beach. With so little time to spend, we had booked a tour to Mont St. Michel for that day, but a glitch in communication with the tour operator nixed that plan.  So off we drove instead along narrow tree-lined lanes threading through lush, rolling farmland, dotted with charming stone buildings and beautifully aged walls bordering fields that we realized were the same fields where men had fought so bitterly.

When we reached the cemetery, we were awed by its somber beauty, by the meticulous care and attention paid to the landscaping, the monuments, and the thousands of graves. We were also struck by the number of visitors, most of them French, all of them hushed and reverent. I heard one great-grandfather, an American who wore the hat of his former battalion, trying to explain the magnitude of what had happened to a boy of about ten; it was one of the moments in that visit that moved me to tears. 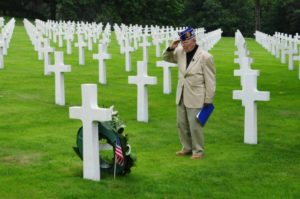 Standing on the bluff above Omaha Beach, I kept trying to superimpose on the present view what the scene must have been like on June 6, 1944 and the days following. The sheer scope of the valor, resolve, and sacrifice in the face of what must have been such terror and chaos — again, I was awestruck and humbled.

The visitor center is designed to immerse one in just what it took to pull off the invasion that turned the tide of the war — on all levels, from the strategic cooperation of the Allies to the “ghost armies” and fake paratroopers used to distract the enemy, to the long months of training for the troops. As bloody and costly as D-Day was, it came home to me, pacifist that I am,  that the young men who were sent up against the Nazi guns were as well prepared and resolute as was possible. That so many of them died so young is a tragedy, but not a senseless one.

“If ever proof were needed that we fought for a cause and not for conquest, it could be found in these cemeteries.

Here was our only conquest. All we asked . . . was enough soil in which to bury our gallant dead.”

I found among the displays a radio set that must have been exactly like the one used by my sons’ grandfather, who landed on Omaha Beach on the third or fourth day of the invasion. My father-in-law rarely talked about his experience in the war, but there was one occasion where he told me, quietly, about feeling a tug on the toe of his boot as he ran up that beach. He looked down to see the trip wire of a mine across his foot. “That’s the last thing I’ll ever see,” he remembered thinking. But the mine didn’t go off, and he kept running into the fight, and he survived to return to his beloved wife and start a family and live a long and illustrious life. The fact that so many of his brothers in arms did not is, I’m sure, what underpinned his reticence. 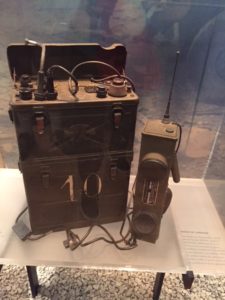 It was a somber day, but a deeply restorative one. Apparently I had to go across the big pond to be reminded of what is enduring and admirable about America. I came away from that cemetery with my own resolve: this nation, flawed as it is, divided and rancorous as it currently seems, rests on ideals that will endure — that must endure — despite the threats that beset it, these days largely from within. The experience of seeing those rows upon rows of white crosses and stars of Davids stretched across the wide bluff, right above the beach where they died fighting to preserve the hope of freedom and a just society . . . let’s just say it set me straight.

The day we returned home was the same day Senator John McCain died. And I was humbled and awed once again. I disagreed with the senator on many of his positions, but I admired him for what he had endured for his country, for his clear-eyed leadership, and for his unflagging determination that this is a country that can and does and must remain worth fighting for.

And I say that as a pacifist.

Merci,  France, for the reminder. And thank you, Senator McCain, for your sacrifice, for your service, and for standing up for what you believe in. And to both for making this American proud again. 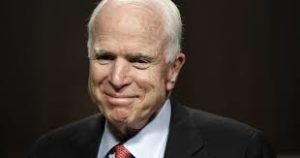