The question of our true nature hangs heavy in the air these days, even in our small town nestled in upper Napa Valley. For the remainder of the school year, I’m filling in at the middle school for the eighth grade English teacher, and we’ve begun a unit on Anne Frank’s diary. Because the woman I am subbing for is a highly skilled professional with abundant resources and experience, she wisely devotes plenty of time to building context before and while the kids read the book. For many of these students, it’s their first deep dive into a world that probably seems less familiar to them than Panem in The Hunger Games.

We’re wrestling with some ugly concepts: anti-Semitism, dehumanization, racism. We’re looking at the systematic dismantling of Anne’s life, her journey from beloved thirteen-year-old enveloped by a prosperous family to closeted fugitive and eventual captive of the Nazis. We’re looking at the historical and societal forces that drove the organized madness of the Genocide. And we are considering the idea of faith in humanity: what it means, why Anne maintained it despite all that was taken from her, what evidence there is for it in our reading.

These thirteen-year-olds are taking a peek at what it is within human beings that make us capable of engineering atrocity against our fellows, and what it is that allows us to withstand evil with our souls intact. Heavy stuff. Responses range all over the place: prim moralizing expressed in curly penmanship; fascination with Nazi swagger; what’s-it-got-to-do-with-me apathy; quiet, clear-eyed horror.

They’re encouraged to make connections between the reading and their own experience as well as what they know of current events. Donald Trump comes up a lot. When they compare The Donald to Hitler, I maintain professional detachment. I ask them what specific similarities they see (“He tells people to hate Muslims! And Mexicans!”) and also what differences (“He doesn’t say we should kill them all . . .”). I refrain from pointing out that no, he more closely resembles Mussolini — or is at most,  as Bill Maher suggests, Hitler-adjacent.

It’s fascinating to watch and listen as they take tentative steps toward recognizing how we often fail to live up to our stated values, as individuals and as a nation. They’re discovering that adults can get it wrong. Disastrously wrong, on a national scale, possibly a global scale. Wrong in ways that can shatter the lives of kids who have enough to contend with just by virtue of being thirteen.

They’re just kids. Their thinking is often simplistic, their remarks inarticulate. Some are inattentive, some are lazy, some are just plain rude. A few could spend all day being dunked in the sea of knowledge and come out dry. Eighth grade can be maddening. It takes constant attention and an ever-adjusting filter in order not to miss the good stuff, the brilliance that now and then beams unannounced out of the murky tangle of hormones, bewildering social interactions, distractions and confusions that make up the thirteen-year-old psyche.

Last week we were considering the methods those in power might use to dehumanize another group: isolation, discrimination, malicious propaganda, the stripping away of rights, scapegoating, the fomenting of hatred and fear and violence. One kid pushed back the hat he wasn’t supposed to be wearing in class and piped up, “But, wait  — if you do all this stuff to somebody else, aren’t you really dehumanizing yourself?”

Again I maintained professional calm, while inwardly levitating with joy. The last thing you want to do to an eighth grade boy is single him out for fawning approval in front of the whole class. But thank you for making my day, kid.

So, writing? As part of this unit, the students will be 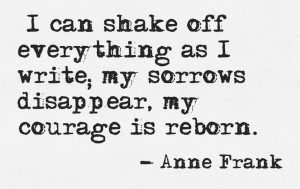 composing an essay on the theme of faith in humanity. And on Friday they’re turning in the final draft of a blended poem. I await inspiration. Stay tuned.