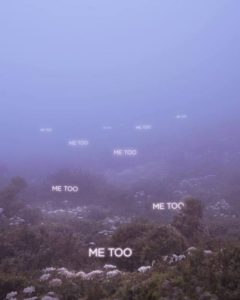 My chest feels tight. My stomach has the wobblies. It scares me to say these things out loud, in public.

When the #MeToo conversation began, I thought it was a good thing, but a rather distant one. I was glad to see awareness building and some healthy, about-damn-time outrage in the wake of the Harvey Weinstein episode, which has served as a leaden straw atop the ancient, stinking load on the camel’s back.

Like the wise and eloquent A.S. Akkalon, it took some time before I thought #MeToo had anything to do with, well, me too. After all, I’ve never been raped at gunpoint or abducted or anything like that. I mean, what do I really have to complain about? Well, except for the usual stuff, like being catcalled as a young woman or groped in crowds, or having to search for  clever, not-too-bitchy ripostes to a boss’s repeated suggestions that we take a break and “do it doggy-style.” Or the endless observations about my body and my sexuality that came my way with utter impunity from directors and agents back when I was an actor, back in the days when I really needed the job, or the director’s approval, or the agent’s good opinion.

Like so many women, I built up a protective crust to numb the pain of how those things made me feel. Over time, the crust became a calcification of shame and learned helplessness, walling off a seething core of outrage. I was taught, not directly but through a thousand messages, a million cultural cues, that this was just the way things were. As with so much that is negative in human development, I was schooled to confuse that which commonly occurs with that which is normal.

The shame bloomed like a noxious weed as I began to accept responsibility for the words and actions and attitudes of others. Maybe it was treatment I somehow deserved. Maybe it was because I was too pretty, or not pretty enough, or because I wanted to be liked, or because I was stupid enough to mistake predatory behavior for friendliness. The learned helplessness? That lesson came down hard any time I registered a protest, from the day I got in trouble at school for kicking dirt at the boy who harassed me to the man in a San Francisco nightclub a decade later, who told everyone within earshot what a bitch I was because I’d slapped his hand when he grabbed my ass. I didn’t care what he thought, but the general laughter as I exited the bar burned in my sternum, another toxic contribution to the burden of self-doubt that had already become so much a part of me.

After all, if I were healthy enough, strong enough, cool enough, this wouldn’t happen to me. Would it?

It’s astounding how difficult it is to dismantle this mindset. It requires excavation into memories that squirm with repulsion, of experiences that helped lay the groundwork for the assumption of guilt that is not my own. I actually have to tell myself that it was not my fault when I was eight years old and a man from the neighborhood — who may or may not have been my best friend’s reclusive, much older brother — lured me into a grove of trees and offered to teach me a game. I was surprised when the game involved tickling me underneath my panties, but I was also flattered by his attention. He laughed as though it was all in good fun, so I laughed too, and he was telling me about secrets and how there would be more, and I found it all very exciting. But then someone approached and he suddenly hurried off. I was sorry to see my new friend go. I went home and told my mother, who called the police, who came and asked me a lot of questions, during which I learned just how wrong my interpretation of the event had been. And when the policeman left, my mother told me not to tell anyone because of what they might think, and most especially not my father, because of what he might do.

I was afraid of my father when he was angry, and I was not at all certain to whom he might do whatever it was his anger would drive him to. It was clear my mother feared the same things. I had the crushing, bewildering realization that I’d been complicit in something dark and nasty, without even knowing. Without even choosing.

I also have to tell myself it was not my fault a year later when a friend of my father’s who lived down the street from us offered to show me pictures of naked ladies. Because he was a familiar figure, someone whose house I was allowed to visit, someone with a friendly wife who gave me cookies — she and the cookies were upstairs in the kitchen; he and his pictures were downstairs in the den — I was slow to recognize the troubling sensation in my gut. I did figure it out in time, though. In time to make sure I never told my father, or my mother, or anyone.

It’s hard to tell these stories. But doing so is like wrestling my way out of a chrysalis. I offer them not because I want sympathy or because they are in any way extraordinary — sadly, I don’t know a single woman who has no such stories. I offer them because I do want to jump on the bandwagon. I want to shatter the silence and cast light on the darkness. So I refuse the temptation to turn away from the opportunity to add my voice to the Me Too phenomenon.

I am married to a man who does not treat women, or anyone, this way. I have adult sons who are the same. There are many men like them. Their behavior is what’s normal.

And women — and those of any gender configuration — who grow loud with indignation when treated like objects, who are quick to come to their own defense? Their behavior is normal.

I hope the #MeToo movement lasts a lot longer than the current news cycle. I hope its reach is both deep and wide. I hope it changes things. I hope my smart, sassy, capable grand nieces  and grand nephews grow up in a world where sexual harassment and intimidation are clearly, obviously, always unacceptable. And never, ever again just the way things are.