I was there, friends. The glow of Saturday’s Women’s March on Washington (and just about every other major city in the country, as well as many world capitals) is still with me. I was fortunate to be part of the demonstration in DC and my goodness, what a day it was. From my perspective somewhere in the shifting middle of that enormous crowd, I felt like a grain of sand on a beach — but it was the beach I wanted to be part of. Since the march, I’ve heard news anchors and pundits remark that there hasn’t been anything like this since the anti-war demonstrations of the 60’s. Trust me, young people: I was there back then. This is bigger.

The most remarkable thing about the whole astonishing experience? Not the sheer numbers, although that was incredible. It was the good will. The civility. The cooperation under trying circumstances. Believe me, we were so jam-packed that at times it was impossible to move, impossible to keep from being jostled and pushed by the press of bodies, and perilously easy to lose contact with one’s march buddy. People threaded back and forth through the throng, trying to find their group or a way forward or a slightly less congested spot where they could get some air. The lines for the pitifully few porta-potties stretched for blocks, and by the time you reached them the toilet paper was long gone. The crush near any of the jumbo-tron monitors was literally breathtaking. 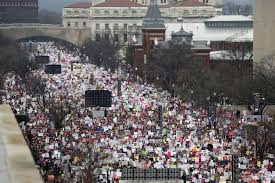 And yet nobody got hostile or rude or even deliberately pushy. All day long — and it was a loooong day, especially if you’d traveled into DC that morning — the atmosphere was friendly, suffused with consideration and concern for one another. People edged aside wherever possible to help utter strangers stay with their groups, or to make sure wheelchairs and strollers got through, while those who had scaled trees or scaffolds passed along helpful information from their vantage points. The signs that surrounded us (some carefully crafted, some hastily scribbled en route) attested to a range of issues, among them climate change, civil rights, preserving the ACA, reproductive rights, equal pay for women. Remarkably, instead of watering down the message, the very diversity of people and interests combined to form an overarching sense of unity. It was as though we all operated together under a vast, unspoken agreement: whatever our concerns or fears, whoever we might be unhappy with, it wasn’t with our fellow marchers. We were all there to make our voices heard, along with 500,000 of our closest friends. 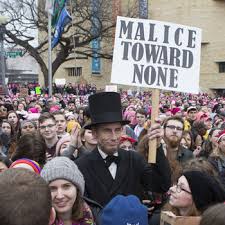 I’ve never experienced anything quite like it, and I don’t expect to again. But that one day, that experience, generated energy enough to keep me picking up the phone and writing post cards and going to meetings for as long as it takes. I believe it did the same for many, many of us there. 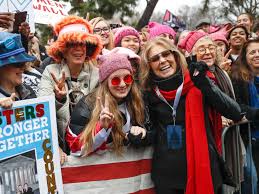 And that is truly the point of the whole exercise. One of the signs that caught my attention, although it wasn’t one of the most clever or carefully rendered, said, “This is not enough. If all we do is march, we lose.”

That might seem like a buzz kill at first blush, but it struck me as right on. All of us who were at that march, or any of the other marches throughout the country — and all of us who couldn’t make any of the marches but are deeply concerned for the future of our daughters, our diverse communities, our economy, our planet, and the very soul of the democracy we cherish — need to channel the energy of January 21, 2017 into positive action. Resistance and assistance: it needs to be part of our lives.

There are a number of ways to do that, and it doesn’t mean giving up your day job to become a rabble-rousing, fiery-eyed activist.  You’re not on your own here: whether or not you marched, you can capitalize on the new groundswell of energy by taking part in the 10 Actions/100 Days campaign from the Women’s March: effective, doable steps you can take even if you’ve got a full time job and kids at home. Also check out Indivisible: A Practical Guide For Resisting the Trump Agenda. Visit the Indivisible Facebook page. You can find a local Indivisible group, or maybe form one of your own.

The point is, we all have a contribution to make. There is stuff we can do. And we really, really, gotta do it.

The upside? For those of you who couldn’t be at a march, and who may be feeling a sense of dread or despair or wondering what happened to the country you thought you felt at home in, let me assure you: it’s still here. It was out in force, peaceably but unmistakably, in the millions, on Saturday. And it’s not going away. 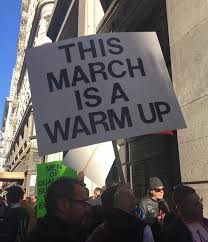 Signing off now to put in a call to my California senator, Kamala Harris, to tell her how proud I was to stand in the crowd on Saturday and see her up on the podium addressing us. You go, Kamala: we’ve got your back.

How are you feeling, post-march? Did it change your outlook? Will you be taking action? Please comment and share!