I’m not a horse whisperer, not even close, but I am have learned a few handy 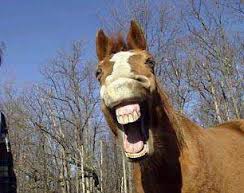 phrases of Horse. In fact, during my two plus years as a volunteer at Sunrise Horse Rescue in Calistoga, a rescue and sanctuary for horses who’ve been abused, neglected, or whose owners can no longer care for them, I’ve learned more about natural horsemanship than I did in all the years I was taking riding lessons or hitting the trail on horseback or self-consciously trotting into the show ring.

It’s a fascinating pursuit, learning to communicate with another species, especially when that species is one that has such a long association with humans and yet remains at heart only semi-domesticated. A horse is a bundle of contradictions: a thousand pounds of strength and fragility, resilience and sensitivity, flightiness and courage. Winning a horse’s trust and respect is an experience like no other.

What’s amazing is that, once you have a horse’s attention, you really have their 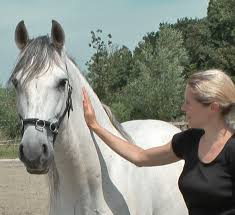 attention. Being attentive and mirroring emotional states of herd members — and when you’re working with horses, they regard you as a herd member; the only question in their mind is where you rank  — is a basic survival skill for horses. As big as they are, they are skittish prey animals who rely on their speed and each other to keep them alive. And once they’ve accepted you as a leader, they dial in and focus on you with such intensity that it’s a bit breathtaking. To an observer it seems magical, but in reality natural horsemanship merely uses the horse’s own perspective, sense of herd dynamics, and methods of communication. 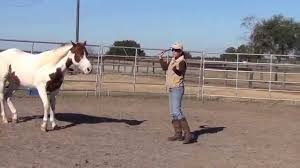 natural trainers at work — they way they seem to effortlessly link with that equine mind, partnering with the horse and directing its movements with the most subtle of signals, lightly twitching a lead rope or a progress string, or just using body language to prompt the horse to change gaits, switch directions, back up, stop altogether, even when the horse isn’t wearing so much as a halter.

I consider myself a white belt still. But I am learning. It may take another horse geek to appreciate the gratification I felt a few weeks back when I found myself speaking Horse effectively, in a situation where I needed it.

I was alone at the rescue on a late summer evening, feeding dinner to our resident herd of twenty-plus equines. I got a text asking me to give Roxy, one of 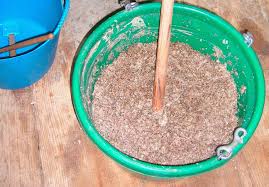 our older, arthritic Thoroughbred mares, a dose of “bute”, or phenylbutazone  — sort of like Advil for horses — since she’d shown signs of lameness earlier in the day. The bute is in powder form, to be mixed in with a dish of soaked hay pellets, or bran mash. No problem there: I soaked a small feeding dish of pellets, sprinkled in the correct dosage, added it to my small tractor load of hay and other feed, and set off into the gathering dusk to bring the critters their dinners.

I reached the paddock where Roxy lives with her pasture-mate, Star, another Thoroughbred mare of a certain age. Roxy showed up at the fence and happily dug into the dish of dosed pellets I held out for her. She was chomping merrily when Star showed up, and things got awkward. Star is the leader in the Star/Roxy combo, the jefe, il capo de tutti capi. Herd hierarchy is never more clear than when it comes to food: if you want to know which horse is in charge in any given group, just put out some hay and you’ll find out fast. Star, being the big kahuna, trotted up and shouldered Roxy out of the way, demanding the yummy bran mash for herself.

So there I was, standing on my two measly legs, my hands full with holding the

feed dish, wondering how to keep the wrong horse from devouring the meds, while poor Roxy sidled off to a safe distance and looked regretfully over her shoulder. Meanwhile the rest of the Sunrise horses stomped around in their own pastures, waiting impatiently for their dinners.

I recalled what I know of horse-speak.  I whipped off my sunglasses, and fixed Roxy with a narrow-eyed stare. I sort of hissed at her.

Star is a big horse: I weigh a little more than one-tenth of what she does. But I had just spoken to her the way a dominant mare would, and in response she 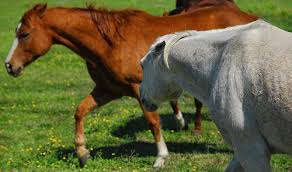 took one look at me and turned tail, moving off to the farthest edge of the paddock. I clucked to Roxy, who happily came over and resumed munching the mash. Star made another attempt; I gave her the stink eye again and off she trotted, until Roxy had polished off the pellets and ingested all the medicine. And then Star got her hay and Roxy got hers, and everybody was happy. No fear, no resentment, no coercion involved, because in Horse World I had made a perfectly clear and reasonable request.

Okay, so I didn’t make Star jump a fence or do fancy tricks. But I felt as elated as a 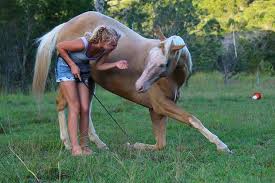 lone traveler in a foreign land who discovers she can make herself understood with the locals.

What barriers to understanding have you overcome, with other species or your own? I’d love to read your comments!