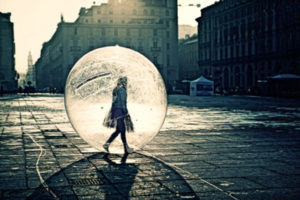 As we’ve learned this past month, we all live in bubbles. We bounce around through our daily lives cushioned within shimmering, distorting spheres that separate us from one another in ways we may not even be aware of. We cope with the rocket-paced onslaught of media that comes at us 24/7 by operating from our own centers of belief, background, perspective, prejudice. We float along in the unfounded certainty that the way the world looks to us is the way the world is. On Thanksgiving weekend, I had a blessedly bubble-shattering experience that I’d like to share with you.

My husband and I left our mostly liberal-leaning Northern California digs to join family members in Idaho, where we lived from 2008 to 2014, for the holiday weekend. Prior to this trip, like every other venture to the Gem State, our Nor Cal pals offered half-joking warnings about venturing into Red State territory: did you make sure to take the Hillary stickers off your car? and so on.

It’s easy, while trapped in the California-blue bubble, to make assumptions about Idahoans (yes, people who live in Idaho do indeed refer to themselves that way). And those assumptions — oh, yeah, Idaho, where they’re all uber-conservative, intolerant, diversity-denying gun-toters, if they’re not outright white supremacists — pretty quickly add up to a bias that’s as blinding and unfair as any other. It’s not intended with conscious ill will; it’s just a mental category, an easy way to think about people who don’t share your idealogical or cultural sphere. From inside this bubble, that’s what that bubble looks like.

Anyway. There we were last Saturday in downtown Boise. We stopped at one of our favorite indie coffee houses — a place hip enough to do Berkeley, CA proud — and then walked down to the main plaza to attend the Festival of Trees. It’s an 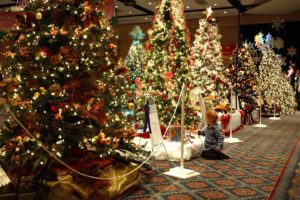 annual holiday ritual that takes place in the Center on the Grove, Boise’s all-purpose event center. The Festival features thousands of Christmas trees and wreaths, all exuberantly decorated by various organizations. Big companies, small businesses, stores, restaurants, insurance companies, heating and air conditioning outfits, scout troops and Rotary clubs vie for ribbons in categories like Most Original or Best Traditional. There are performances by local choral and dance groups, there’s a pop-up cafe selling hot chocolate and holiday pastries, a Santa’s village where kids line up to inform the big guy of their wish lists, and everywhere there are sparkly lights. All the trees and wreaths are auctioned off to support charity (this year, the Neonatal Intensive Care Unit at St. Alphonsus Hospital). It costs maybe seven dollars to get in. And everybody within a hundred miles goes

As we approached the plaza, we were dismayed to see a line of people stretching all the way across the square and around the block. The queue was moving at a glacial pace. “Excuse me, is this line for the Festival of Trees?” I asked one pleasant-faced woman, just to confirm before my husband and I baled on the whole idea in favor of going to lunch instead.

“Oh, no — this is Empty Bowls,” she explained with a smile. We’ve been away from Idaho for a couple of years now, so we’d forgotten that this is what the locals also do to kick off the holiday season. Empty

Bowls is a fundraiser for the Idaho Food Bank, which has distributed 68 million pounds of food to needy families and individuals in the past five years alone. Here’s how it works: you purchase a hand-made bowl, created by one of the thousands of school children or community service members who participate, and then you stand in line to have your bowl filled with soup and receive a piece of bread. Standing in line with your empty bowl, waiting for it to be filled, is part of the deal. People wait cheerfully. For hours. And everybody within a hundred miles goes. Afterwards they go to the Festival of Trees.

In that line, willingly sharing the experience of need, were thousands of people, 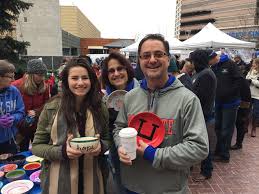 huddling in the biting November wind. Elders, adults, young people, kids. Doubtless many of them do not share my political views. Many of them, maybe most of them, and I would disagree heartily on a lot of things, from gun control to reproductive rights. But those differences floated away on the late autumn breeze in the face of the sense of connection, of commitment to community, that prevailed in that chilly plaza.

When, we asked ourselves at the end of the day, have we witnessed back home in the Bay Area a proportionately large and unified coming together for one, simple, beneficent purpose? With no protest, no proselytizing, no promises of anything other than what there was. Just empty bowls and hot soup and pretty trees. And a chance to be together and do some good.

Bubbles were meant to be burst. It’s not always so nice when they do. But it’s ultimately life-affirming. And these days, more than ever, we need to beware our unwarranted assumptions.

What about you? Have you found your own bubble stretched or shattered by recent events? Please comment and share!