The Christmas trees of my childhood were spindly 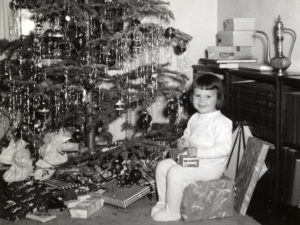 affairs,purchased at a local tree lot and dragged home on the roof of the car, already shedding needles. They perched in a corner of the living room, listing slightly, blazing with the big colored lights that are vintage chic these days but which back in the day would darken utterly if one bulb failed or shattered, provoking fits of swearing by my father. Our little tree sported glass bulbs and lots and lots of tinsel, which I adored but my mother despised because it tended to fall off and attach itself to the sculpted carpet, where it defied the vacuum cleaner for months. Faded silver tendrils could be found lurking in the corners in July. The tree and a cut glass bowl of sparkly ornaments constituted the entirety of our holiday decorations. I thought they were magical.

In the early days of my adulthood and first marriage, we still did the cute-little-real-tree thing, minus the tinsel, and it was just fine. But then we had kids, and a big house with a soaring ceiling, and we were fully subsumed by the era of Big 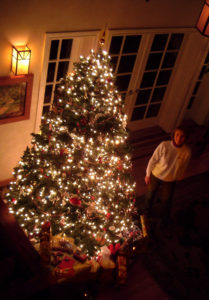 Christmases. The scale of our entrance and family room necessitated that we put
up decorations that would suit a department store, and the tree had to be big too. Now we had a twelve-foot, pre-lighted spruce which we elevated further by placing it on a four-foot platform covered with fabric vaguely suggesting snow despite the fact that we lived in Southern California. Of course the tree was artificial, since we were responsible parents who feared that a natural tree meant an unexploded bomb in the living room, capable of bursting into flames at any moment and immolating us all in our sleep. It took two of us to haul our tree down from the attic; decorating it required a ladder.

Along with the tree, the rest of Christmas took on size. More ladders were needed to hang the lights, garlands, wreaths, and furbishes that manifested in every corner of the house, inside and out. I even decorated the bathrooms. On the big day, we celebrated with a large extended family, and there was no Elfster or Secret Santa or anything like that. Everybody brought gifts for everybody else, except for the kids, who simply received presents from all the adults. The pile of wrapped boxes under the tree grew to such proportions that one year my sister, in trying to lean over the packages to unplug the tree, lost her balance and had to be effectively air lifted off the pile by my brother-in-law, who hoisted her upwards by the back of her pants. Opening gifts on Christmas morning took so

long that it required breaks for coffee cake and pastries and coffee laced with Bailey’s. The kids would drift off to play with their new acquisitions before they’d even finished opening all their presents. And I’m not even talking about the stockings.

Don’t get me wrong. Those Christmases were glorious, and I’m lucky to have them in my memory bank. But they were also a little nuts, or maybe that was just me. In an effort to arrive at the
holidays ready to focus on the rounds of parties and school programs, with gifts shipped to distant friends and relatives and thoughtful items at the ready for teachers, neighbors, cleaning ladies, mailmen, garbage men, the folks at the dry cleaners, and with hundreds of personalized cards to send out, it got to where I would start in August. Gift wrapping alone took days. And no matter how hard I tried to stay ahead of the onslaught, I would end up frazzled and exhausted. The magic of the holiday, it seemed, was reserved for kids; I and all the moms I knew were like line producers, making it happen. 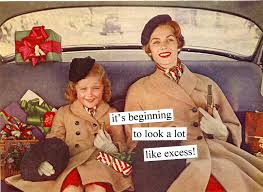 Christmases came and went, the kids grew up, life changed shape and dimension. I was widowed, then I was remarried, then the kids were both out of the house 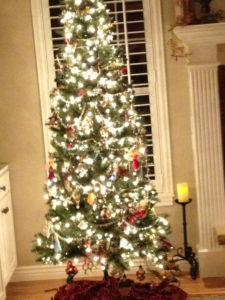 and my husband and I moved four states away and downsized drastically. We
had a home less than half the size of the previous one, which suited us admirably, and our Christmas tree assumed smaller proportions. It became a slender 6-footer that could fit nicely in our combination living/family room, and it was just big enough to display our favorite selections from the hundreds of ornaments collected over the years. The extended family instituted a scaled-down gift exchange. Christmas was still a big deal, but I didn’t start to tackle it seriously until Thanksgiving. Meanwhile some of the adult children in the extended family were establishing Big Tree Christmases of their own. We gradually, gratefully passed the torch.

Since then, we’ve moved back to our home state and downsized yet again, to a

dwelling that measures roughly the same square feet as the bottom floor of our previous house. And it suits us admirably. There is less room for decorations, but  whatever we display has proportionately more impact. This year we have a three-foot tree on our mantel, with those cute little rice-sized lights wound through its branches. It holds only our very most treasured ornaments. No ladders are involved in decorating, which takes a few hours only because I like to dither.

Our gift list has likewise undergone scaling down and simplification. There’s travel involved, to places where we’re the guests. And I find myself getting a big kick out of the pretty displays in the shop windows, and the municipal decorations, and everybody else’s Christmas lights. It’s not so much up to me anymore.

And you know what? The magic happens just fine. 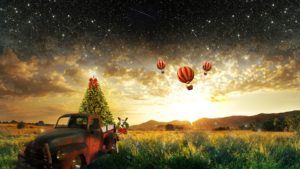 How about you? Have your festivities expanded or contracted? Please comment and share. And by all means, have a peaceful and happy holiday season.