The Wall already exists, my friends. Not between the USA and Mexico, but between us and us. It’s been building for some time now, in fits and starts, but its construction really took off with the last election cycle and has only accelerated since. Want evidence? Google “divided America” and up comes a long list of articles and think pieces, and they’re even from credible sources: the Associated Press (which has a slick multimedia presentation on the topic); the Atlantic (written before the election); the New York Times (keep reading — not the liberal screed you might assume). Gallup published the results of a poll in late November, which showed that a record high — 77% — of Americans “perceive the nation as divided” (personally, I find it remarkable that 21% of those polled believe the nation is “united and in agreement.” Would those be people without televisions, radios, or newspapers?) Gallup’s summary notes that while this is a record, similar polls over the past 21 years have revealed a majority of us who think we’re divided, except for the period right after 9/11.

And here’s the thing: we’re not happy about it. Whatever side of that invisible Wall you’re on, its existence disturbs you, doesn’t it? The latest election may have left you feeling triumphant or terrified, but that Wall — the one that has you looking at your neighbors and coworkers and  Facebook friends with a tinge of unfamiliar suspicion — that’s just wrong. We’re the nation of E pluribus unum, after all. We grew up learning about America as the Great Melting Pot. We already fought our Civil War and came through it, bloodied but unbroken. What we share is greater than our differences. So, what’s with the Wall? Who put it there?

A question like that is likely to result in finger-pointing and reducing each other to labels: immigrants, neocons, liberals, racists, fascists, elites, Republicans, Democrats. That’s the most insidious effect of the Wall; it does its work over dinner table conversations and in coffee houses and at soccer games. Some of us are so upset by the discussion that we refuse to engage. I think the better question is: who does the Wall benefit?

Don’t look to me for an answer; my role here is simply to ask the question. Discuss.

Meanwhile, I’m interested in how we can each do our part to dismantle said Wall. Every little crack, fissure, chink, tunnel, or grappling hook helps. And whenever we manage to create an opening, the result is joy. Relief. Recognition of one another as the brothers and sisters we truly are. Call me Pollyanna, but I’ve lived out here on the Left Coast and I’ve lived in redder-than-red Idaho and I’ve traveled around a fair bit — and I remember the sixties and Viet Nam and the Summer of Love and Altamont — and my firm belief is that the vast majority of us welcome opportunities to get through or over or past the divide that separates us.

There are those who do not, certainly. They’re not the ones I’m talking to here.

So, how do you tunnel through an invisible Wall? Humor is one way, and by humor I mean laughing with, not laughing at. Laughing at is a weapon. Laughing with is bonding. We’re all flawed humans dealing with absurd challenges and life is often ridiculous, and anybody who is not a confirmed psychopath can appreciate that fact. Sharing laughter has the automatic effect of creating warmth and connection, even when, especially when, we disagree. All you have to do is take condemnation out of the equation. 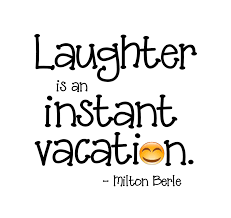 Here’s an example. During the last month of the presidential campaign, I spent part of every week volunteering to make get-out-the-vote calls. I’ll leave it to you to speculate as to which candidate I supported (hint: she’s not the Current Occupant). The phone numbers we were given belonged, as best the database knew, to Democratic or Independent voters, and my job as a caller was not to convince anybody who to vote for (because even the DNC knows better than that) but to just confirm that the voter supported you-know-who and if so, urge them to mail in their ballot or hightail it to their polling place.

You will not be amazed to learn that the database was imperfect. I reached one caller, and introduced myself in my sprightly, please-don’t-hate-me-because-I’m-bugging-you-at-home-and-I’m-really-not-a-telemarketer manner:

“Hi, my name’s Jan, and I’m a volunteer with the Democratic Party. This isn’t a fundraising call; may I just take a minute of your time?”

A gentleman with a slight drawl and a rich note of humor in his voice responded, “Oh, Jan. You don’t want a second of my time.”

Already I was grinning. “Really? Why’s that?”

“Because, Jan, I’d rather set myself on fire than vote for Hillary Clinton.”

And I cracked up. He and I laughed together for a happy moment before I said, “Well, that’s pretty clear! Thanks for your time.” We wished each other a good evening and parted friends.

It may seem insignificant.  But because he reacted to me as a real person, somebody just doing my best and with good intentions no matter how misguided he thought I was — because he refused to either label or condemn me — he and I connected on a personal level, even if only for a moment. No anger, no rancor, no hatred. That right there was a chink in the Wall. 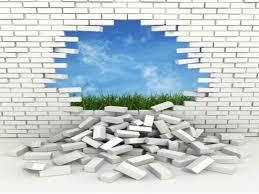 Those little fissures, those openings, those cracks add up. No wall can withstand them forever. I say, let’s all keep burrowing.