Last weekend while many of us were busy managing our anxiety caused by two infantile, ego-possessed world leaders — one of them ours, as obscene as that fact is — threatening to blow us all to kingdom come, a virulent disease erupted in Charlottesville. 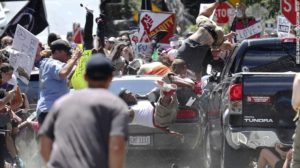 By Monday morning we were reeling from the images of helmeted, camo-bedecked goons carrying automatic weapons, marching through the streets of Thomas Jefferson’s beloved university town. Men with crazed faces and blazing torches shouted Nazi slogans. And a 32-year-old woman, Heather Heyer, had been killed and 19 other people injured by a hate-crazed young man who used his vehicle as a weapon.

Hatred is a psychic disease, a species of madness that lurks in the zeitgeist in the manner of a latent virus. Under certain conditions it erupts, possessing the minds of its carriers with demonic cunning, twisting their thinking and behavior until they become a danger to themselves and others. People aren’t born with hatred. It’s an acquired infection, a crowd disease. Conditions favorable to its emergence include periods of great change — America’s Civil War,  tectonic economic  shifts, the women’s movement — and when that coincides with a societal leader who rises to power through encouraging it, hate can roar to life and become pandemic.

Hatred’s current manifestations — white supremacy, neo-Nazi’s, the alt-right and all of its permutations that have been burrowing like maggots through the collective consciousness for years —  burst forth last week into full, noxious bloom. And it’s spreading. Next week there are alt-right “free speech” rallies — one disturbing symptom of the disease is its genius for standing our most cherished values on their head — planned in San Francisco and Berkeley, pretty much in my own back yard.

The question is, what am I going to do about it?

Doing nothing is not an option. I know I can’t treat a chronic, life-threatening malady by averting my gaze and wishing it didn’t exist. Nor can I pretend it doesn’t affect me or that I’m somehow immune. While I’m off distracting myself from the unpleasantness, the disease will spread unchecked, eventually carrying me off in its deadly progression.

Nor does it help to confront madness with more madness, to hate back at the haters. Screaming back at a shrieking madman? All that does is transmit the sickness and give it another host.

Since the insanity seeks to magnify itself by provoking the kind of behavior that feeds it — rage, violence — and since it is reinforced by drawing attention to itself, I’m going to refuse that invitation. 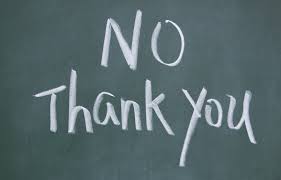 What I am going to do is to show up in the name of sanity. Of community. Of love. I am not going to throw gasoline on the fire by attending the purported rally in Crissy Field or wherever the brownshirts try to gather in Berkeley, where they do not have a permit. I’m going to follow the sage advice of the Southern Poverty Law Center and lend my energy to a counter action.

Boston showed us, if imperfectly, how it’s done. Yesterday 40,000 people showed up to demonstrate their commitment to democracy and inclusivity and their rejection of Nazi-era thinking, leading the 130-odd alt-right co-opters of “free speech” to cower in a bandshell until they called it quits before any of their purported “speakers” had a chance to spew. 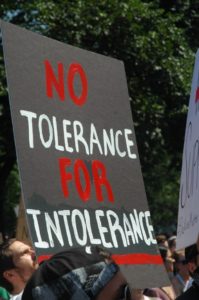 Here’s what the SPLC advises with regard to a hate group rally in your locality:

Do not attend a hate rally. As much as you might like to physically show your opposition to hate, confrontations serve only the perpetrators. They also burden law enforcement with protecting hatemongers from otherwise law-abiding citizens. If an event featuring a hate group, avowed separatist or extremist is coming to your college campus, hold a unity rally on a different part of campus. Invite campus clubs, sororities, fraternities and athletic organizations to support your efforts.

Every act of hatred should be met with an act of love and unity. Many communities facing a hate group rally have held alternative events at the same hour, some distance away, emphasizing strength in community and diversity. They have included forums, parades, and unity fairs featuring speakers, food, music, exhibits, and entertainment. These events give people a safe outlet for the frustration and anger they want to vent. As a woman at a Spokane, Washington, human rights rally put it, “Being passive is something I don’t want to do. I need to make some kind of commitment to human rights.”

San Francisco already has more than one such rally in the planning stages for Aug. 26. The one that sounds the most fun to me is the Loved Up Mobile Dance Party to be held that afternoon in Marina Green Park. Hate withers when exposed to joy and good-natured humor. I’m pretty sure San Francisco, the city that spawned the Summer of Love  50 years ago, can put things in perspective. 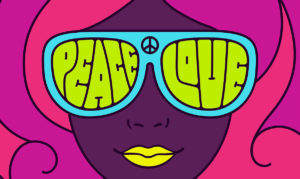 I will seek opportunities to gather with sane, rational, community-centered people and lend my energy and my voice to unity, love, and common ground. I don’t have to agree with everyone I stand with on everything they think — one unintended effect of the alt-right’s vitriol is that it’s beginning to bring together people from different political viewpoints who nevertheless agree on, and cherish, the basic underlying principles that define what we recognize as America. If you haven’t seen it, check out Arnold Schwarzenegger’s offer to help Trump with his post-Charlottesville messaging; it’s the first time in a long while I’ve felt any liking for Arnold. Unless the madness has claimed us, there is far more that unites us than separates us. 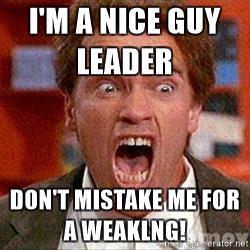 I’m going to take courage from those who show up, and hopefully reflect that encouragement outwards. And I will keep firmly in mind the observation Maureen Dowd made in her August 19 column in the New York Times:

“There will be a lot of pain while this president is in office and the clock will turn back on many things. But we will come out stronger, once this last shriek of white supremacy and grievance and fear of the future is out of the system. Every day, President Trump teaches us what values we cherish — and they’re the opposite of his.”

We are suffering under a sick regime at the moment, with a president who relishes evil. But the darkness will pass, and in the meantime it is an opportunity for each of us who values hope and peace and tolerance and brotherhood and sisterhood, all the ‘hoods, to shine our light. 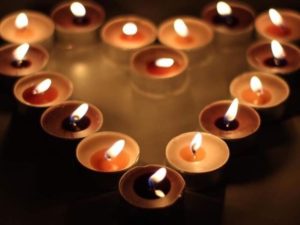