If you’re a fan of Stranger Things, you’re familiar with the creepy netherworld referred to as the Upside Down. It’s the place where unpleasant things happen, where the air is flecked with something unexplained but certainly malevolent, where all manner of dangers lurk. The Upside Down is the territory the heroes have to cross to get from their innocent Before to reach, hopefully, their triumphant After.

At present my husband and, to a lesser extent, I, are crossing an Upside Down of our own. In this case, Before would be prior to last Tuesday afternoon, when he took a nasty spill off his bicycle, fracturing his right collarbone and cracking his right hip socket. There is nothing like spending twenty hours in the emergency room to make one appreciate one’s Before.

I am happy to report that there is every reason to expect he will reach a fully recovered and therefore triumphant After, one in which he can again do things like drive and walk the dog. It could have been ever so much worse, had he not been wearing a good helmet.

*Pause here to sternly admonish everyone within earshot that you are never, ever to even think about getting on a bicycle without a helmet.*

For now, though, and for the next several weeks unto months, we are progressing through the During part, the Upside Down. At this stage, that involves him requiring  physical and occupational therapy six days a week until he can be mobile enough to come home. Which means he is currently an inmate in a post-acute, skilled nursing facility. Which is a polite term for a nursing home.

Unlike many of the residents here (it has recently changed hands and has a more professional sounding name now: previously it was called Golden Living Something-or-other, and I am not making that up), my husband is only here for a couple of weeks at the most.

Golden Living Or Whatever, like other nursing homes I’ve had experience with, is a kind of netherworld of its own, a place where the people — residents and staff alike — exist in a nebulous, timeless state. The staff is relentlessly kind, calm, and somewhat dazed. The patients are mostly just dazed. Like prison (I am given to understand), it is never fully dark here, blurring the distinction between day and night. And like prison, it is never, ever quiet. 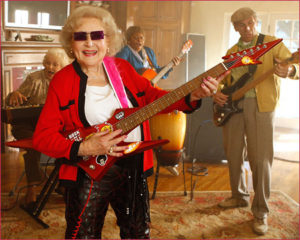 Not what I mean. (fistfuloftalent.com)

As I write this, here from my visitor’s chair upholstered in sturdy fabric from the 1980’s, the call button is going off out in the hallway.

The call button is always going off in the hallway. Bing-bing. Bing-bing. Bing-bing. Occasionally it stops for twenty seconds or so, making it impossible to consign its sound to the unnoticeable. There is another signal that emanates from patient rooms from time to time, apparently one reserved for things more urgent than needing help to the loo: it’s a lower, louder,  BEEP BEEP BEEP BEEP. A third alarm is rarer still, but it has the power to levitate one straight out of bed if you happen to be close to the speaker. It’s like a smoke alarm on steroids.

The speaker is in the middle of the hallway. My husband’s room is next to it.

We are not complaining about that. Here in the Upside Down, you choose your battles. It’s more important to make sure you get the right meds. Once installed here you realize your mission is not to transform the place: it’s to get the hell out of it as soon as possible. Besides, you don’t want to be identified as one of those patients who are endlessly and irrationally demanding. There are many such patients, and how the staff maintains their equanimity is a marvel to me.

When we arrived here, sometime on Wednesday, my husband had a roommate. “Hi!” he said, “Welcome to the end of the road.” He was a guy about our age, and he seemed cool. I’ll call him Bob.

Bob used his call button a lot. He had a lot to say. He was from New York. Or Napa. Or, Germany. It depended on the time of day and who he was talking to. Also he was a former director of training for brain surgeons. And an IT tech. And a tennis pro. He had three cell phones, all of which he was constantly asking for help with from the staff, because he couldn’t get them to charge. That doubtlessly had something to do with the fact he hadn’t paid any of his phone bills.

“How’m I supposed to pay my bill if I can’t use my phone?” reasoned Bob. Hard to argue with that.

We kept the privacy curtain drawn between my husband’s side of the room and Bob’s, but that didn’t cancel out the blaring television from his side, on 24/7, nor did it preclude awkward conversations.

We’d been talking in low voices. We paused. “Yep, Bob, it’s me,” ventured my husband.

“Well, hi, how are you? Haven’t talked to you in a long time!” crowed Bob.

“Oh, you know. Hey, how’s things at the house? Did you get the tree inside? Are you going back to Germany pretty soon?”

This is when we caught on that we were having a phone conversation with Bob, without benefit of a phone. No wonder he sees no need to pay his bills.

Bob is gone now — no, don’t gasp, not gone like that; he’s simply been transferred somewhere else. For the time being, my husband has the room to himself. It’s a real luxury. No blaring television, no fluorescent light on in the room all night long, no bizarre requests to the beleaguered aides.

But that could change at any time. It’s just part of the experience here in the Upside Down.

Don’t miss the next exciting episode.

How about you? When have you found yourself in the Upside Down? Please share: it’s a little lonely down here. 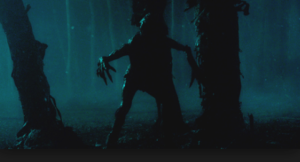