When it comes to horses, within me dwells a little girl who gets excited at the sight of 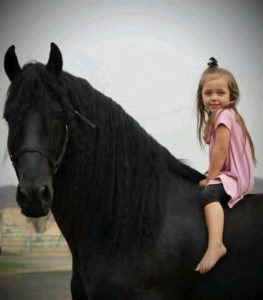 one, always and every time. There are many folks who feel the same, and others who find it mystifying — what’s so great about a giant animal that poops every two hours and has a long face with big teeth and hard feet that might just kick you into next week, they surely wonder?

Whether or not you are among the horse-crazy subset of humans, it is a truth that horses have much to teach all of us. This was brought home to me recently when I, along with others of his fans, had to say goodbye to Ranger.

Ranger came to Sunrise Horse Rescue, the rescue and sanctuary organization in Calistoga where I volunteer, a couple of years ago. Unlike some of the Sunrise herd, Ranger did not represent a case of abuse or neglect. He had been loved and well-cared for by a young girl, for whom he was a dream come true, her very own horse.

And what a horse he was. A big-boned, energetic but sweet-tempered Appaloosa, Ranger was a gentleman whether under saddle or working on the ground. No doubt he taught his girl how to engage with a force larger than she, how to partner with something powerful through understanding and cooperation. I’m sure he taught her confidence: like most of the horses I’ve had the pleasure to know, Ranger figured that if you trusted yourself enough to lead him, then he trusted you enough to follow that lead.

That was true even more in his last years, when he lost his vision. Appaloosas are a sturdy breed, 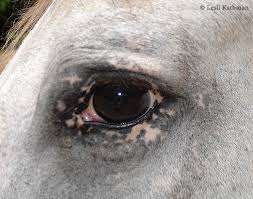 but they are prone to a condition called ERU, or equine recurrent uveitis.

Horses are prey animals who depend on their sense of sight to alert them to sudden movement; despite their size and strength they are acutely aware of their vulnerability, and blindness makes them even more so. Research is ongoing as to why Appaloosas are 8 times more likely to develop ERU than other breeds, but as yet it’s inconclusive. Now sightless, Ranger put his trust in his people, so much so that his girl could ride him at a canter even when he couldn’t see what was in front of him.

But his girl grew up, and her life changed. It’s tough for many families to afford both college and the upkeep for a horse, especially a special-needs horse. So Ranger came to live out his days with us at Sunrise, although his girl, now a young woman, visited when she could.

In his new home, he was doted on by a small but devoted army of volunteers who lavished him with attention and treats. One volunteer in particular, the fiercely dedicated Lynne, spent hours each week with Ranger, grooming him, feeding him apple chunks, and taking him on walks. It was heartwarming to see diminutive Lynne leading great big Ranger out to a particularly enticing patch of greenery where he could graze. “Step,” she would caution him when they came to a low barrier. And he would lift his massive front foot up before placing it carefully back down, testing the ground in response. When Lynne said, “Step,” he believed her; he’d chosen to trust her.

As Ranger grew older — he was in his mid-to-late 20’s when he arrived at Sunrise, already 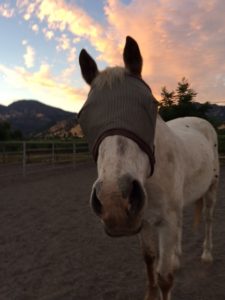 senior for a horse — his ERU led to a chronic and painful infection in one eye. Our vets and volunteers did all they could to keep him out of pain, and for a time he managed to rally and enjoy life. Sadly, horses can remain on pain medication only so long before it causes problems with their sensitive digestive tracts, and eventually we could no longer make him comfortable for the long term. He lost interest in eating and withdrew from his herd members, and as reluctant as we were, we knew it was time to let him go.

On the appointed day, his young woman arrived in the morning, accompanied by her dad and two of her friends. They spent the morning with Ranger, grooming him, feeding him endless treats, and taking him for one last ride. He rose to the occasion with a final surge of energy, prancing around the arena, delighting in the attention and the goodies without reservation.

In the afternoon, Dr. Vanessa Rood from Napa Valley Equine arrived with her assistant. I have 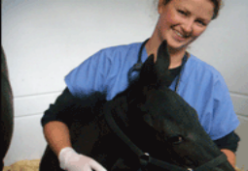 been present with Dr. Vanessa on a number of such occasions, and while this is surely the most difficult part of her job,  there could be no more compassionate and graceful conductor for a horse’s final passage. Considerate of both the horses and the humans, she gave everyone plenty of time and sensitively explained the procedure. Ranger’s former owner led him to a shady spot under an oak, away from the other horses, while her dad and the rest of us in attendance followed at a respectful distance.

As the time grew nearer, the young woman was wracked with mounting waves of grief. Ranger stood still as she buried her face in his neck and sobbed. The other volunteers and I looked on, our own tears building and spilling, as Dr. Vanessa gently inserted the small catheter in a vein in Ranger’s neck and gave him a preliminary sedative.

The wrenching part of witnessing a horse’s exit from life, however kindly it’s done, is that unless the horse is already down due to injury or something else catastrophic, the horse drops from standing once the fatal dose is delivered. “The mind goes first,” Dr. Vanessa explained, “and that’s important to remember.” Often, after the horse is down, there is residual movement and sometimes sound — a gasp, sighing, twitching or jerking — as the body’s energy releases. In my short experience I have seen horses shudder and kick reflexively at such moments, or heard them sigh, and if it weren’t for Dr. V’s kind coaching I’d have been disturbed by it.

The sedative took hold. Ranger stopped chewing the horse cookie crumbs we’d been feeding him to help keep him calm. His head lowered; his breathing slowed. “The sedative is also a euphoric, and a powerful pain reliever,” Dr. V said, “so right now he’s very relaxed and experiencing a sense of well-being.”

Still, she gave everyone time to say goodbye. We all did, stroking the powerful neck and flanks, marveling at the life force that was about to leave us behind. The young lady withdrew at this point, overcome. Shyly, I put a consoling hand on her dad’s shoulder. What is harder than seeing your child stricken by sorrow?

When everyone was as ready as they could reasonably be, Dr. V produced a large syringe and pushed its contents into the catheter. Within seconds, Ranger’s eyes fluttered and his hind legs wobbled, crumpling. Everyone had already withdrawn to a safe distance.

The big horse fell to the ground in a single motion. He lay still and quiet. No twitching, no jerking, no gasping; simply silent and at peace. As though, once again, Ranger had chosen trust.

Dr. Vanessa offered up the poem she uses at these times. You may be familiar with it: 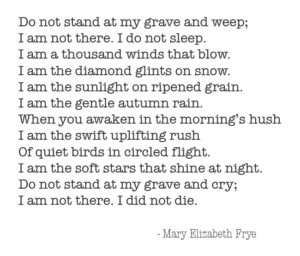 “He’ll always be with you, a part of you,” Dr. V told the bereft young lady, “that’s how energy 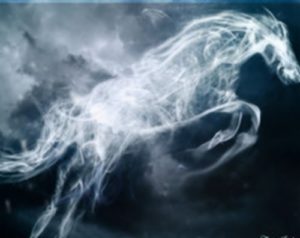 We stood, hushed and humbled. With his customary power and dignity, Ranger had gifted his girl, and all of us, with the final wisdom a horse has to give us: how to do the thing that animals understand but with which we humans struggle so mightily, the very most difficult assignment life hands us. How to let go. How to, finally and forever, trust.

What lessons have you learned from the animals in your life? Your comments are a gift to me.