It’s Sunday and I’m lounging in my favorite chair in front of the fireplace, sipping a perfect cup of coffee and munching, in a leisurely way, on a cream currant scone.It was brought to me by my husband, who arose this morning and sallied forth about a mile and a half down Highway 29 to our local Dean and Deluca.

D&D, if you haven’t experienced it, is an uber-grocery, the kind of place that refers to itself as a “purveyor” rather than a market. It’s a sort of food temple where delicacies are piled in alluring displays of gastronomic architecture, and all you have to do is point to what you want and it is swiftly bagged or boxed for you to take away and consume at your pleasure. You pay a breathtaking amount for it, but you don’t have to run it down and fight off hyenas for it, or grow it and hope the locusts don’t get to it before you do. 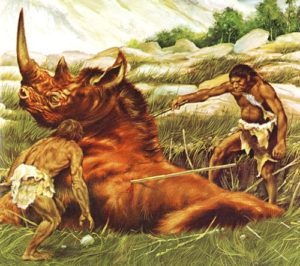 While husband was off securing fresh kill for breakfast, I was accompanying Molly Flynn the Bearded Lady, aka our dog, on her morning constitutional through the vineyards. Our path took us past a low-lying acre next to a creek, where the land is too marshy to be planted in grapes and so is left to its own weedy devices (for now). Molly paused to take care of business, and as she did there was a startled flapping of large wings from within the reeds on the other side of the path. Both of our heads, Molly’s and mine, swiveled instantly to zero in on the sight.

At first I thought it was a goose. The population of Canada geese is increasing around here, as it seems to be everywhere. At school in the early mornings, I’ve taken to recruiting students to chase the geese off the grass field to prevent kids from having to play soccer amidst a mire of goose poop. It’s a quixotic effort, since the birds arrive far earlier than the students or I do, and clearly regard the field as their own. They don’t give up easily. The kids return, breathless and sweating, to collect their reward tickets as the geese flap resentfully overhead, honking their resolve to return like a squadron of avian Terminators.

But as Molly and I watched, what burst from the marsh and into the air was no goose, but a falcon. Probably a peregrine falcon, although I didn’t have time to do a thorough identification. Napa Valley vintners have taken to recruiting peregrines to thwart the smaller birds that eat their grapes. 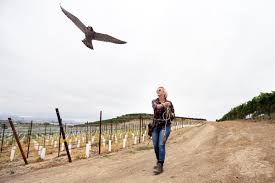 My first reaction was excitement at this glimpse of raw and beautiful nature right here, practically in my back yard. My second was apologetic. “We’ve chased her off her kill,” I said to Molly, who was still frozen in her instinctual stance, pointing at the bird. 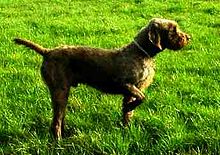 not Molly, but another pudelpointer who looks a lot like her, pointing

I thought about the effort it had taken for the falcon to make that kill, the risk she had taken to zoom past power lines and plunge earthward into uncertain ground to snag her prey, the stores of precious energy she had used up. I felt truly sorry. Molly and I walked on, but I kept looking back to see if the falcon would return to claim her hard-won meal. She did not. I knew that whatever she’d killed wouldn’t go to waste. It was certain to be seized on by a turkey vulture or a raven, or perhaps a coyote or gray fox, all of which abound on the wild margins of our primly settled valley. But for the falcon, it meant a loss of life-sustaining calories. Maybe she’ll make it up later in the day, or maybe she won’t. If she doesn’t, there is no guarantee she’ll have the reserves to conduct another successful hunt tomorrow, after a long, chilly, hungry night. No Dean & Deluca for her.

For most humans in the developed world, eating is easy. So easy, in fact, that we seem compelled to find ways to make it difficult. There was a time when being fleshy was a sign of prosperity, but not anymore. The wealthier and better-educated someone is, the more likely it is they are slender, and this is even more true for women. White, affluent women especially are under great pressure to demonstrate their self-denial in the midst of plenty, to sculpt themselves into taut, reed-thin sylphs even as they produce gourmet meals for friends and family. 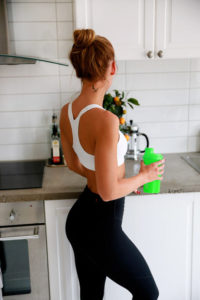 Thus they are driven to renounce whole categories of food, like carbohydrates or anything containing gluten. They work out feverishly, or feel guilty if they don’t, and they adopt punishing regimens like the Paleo Diet. Unless you’ve been living under a rock for the past five years, you’re familiar with the Paleo premise. It holds that we should eat the way our early ancestors did, before agriculture got underway, followed by its attendant evils such as sugar and processed food (along with cities and culture and, well, civilization, but never mind). 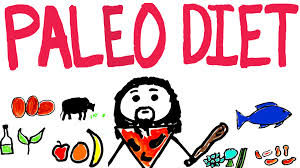 Whole cookbooks abound, bursting with recipes for purely paleo delicacies. Here’s an easy, fast California Spicy Crab Stuffed Avocado that you can whip up in less time than it takes to drive to your Cross Fit gym: 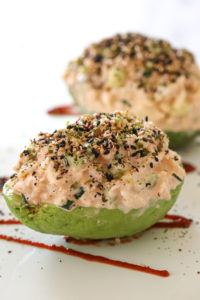 Can’t you just imagine a neolithic Californian, one with access to crab traps and an avocado orchard, relishing this? Do you suppose our hunter-gatherer forefathers and foremothers sat around and congratulated themselves for eating clean? I notice that those who advocate for the whole paleo lifestyle blithely pass over the fact that our clean-eating ancestors were lucky if they lived long enough to reproduce.

Of course our neolithic progenitors were lean. The essence of the real paleo diet, it seems to me, was having to run down or search for your food under often hostile conditions and in competition with other larger and more powerful critters. It inarguably promoted cardiovascular fitness, because there’s nothing like running away from a cave bear that has decided to claim the antelope you practically killed yourself dragging back to your clan, to keep you from putting on those pesky extra pounds. 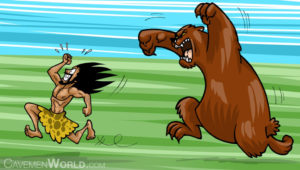 Who wants to live like that? I’m all for eating food that is grown or raised sustainably and is as minimally processed as possible. But give me my scones and cream in my coffee. And let me enjoy them in peace, undisturbed by other predators or news about the latest diet. Seems to me that a major point of progressing beyond our paleo past was to transform eating from a life or death struggle into a pleasure. There’s plenty of other stuff to worry about in modern life. Food, if you’re lucky enough to have access to it, doesn’t have to be one of them. 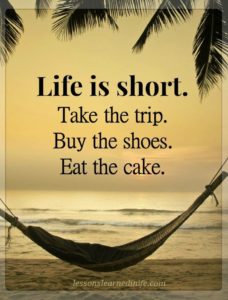 Now excuse me while I follow up my scone with a little chocolate.

As always, I look forward to gathering your comments!