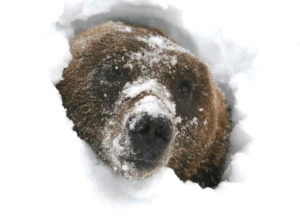 Did you, like me, wake up this morning as grouchy as a bear after hibernation? And just as hungry?

Except that unlike the bear, you probably don’t feel rested. Maybe you’re feeling a bit dazed, perhaps a little clumsy. It’s possible your emotions a little too close to the surface.

You have Daylight Saving Time to thank. And this spring marks its 100th birthday in the US. 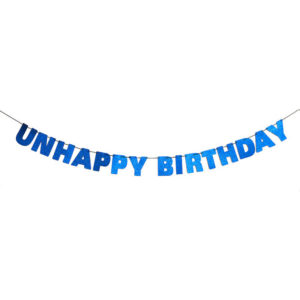 By the way, Daylight Saving (not “savings”) Time is the correct term. Turns out I’ve been saying it wrong all my life.

Unless you live in India, China, or Japan — whose inhabitants surely have problems of their own, but adjusting to the time change is not one of them — your brain and body are at this moment struggling to restore your circadian rhythm. And if it feels like “spring forward” is tougher to handle than “fall back”, you’re right. 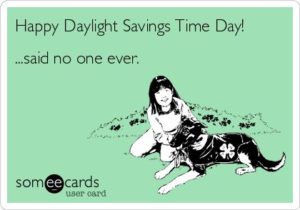 Having devoted nearly 40 minutes to researching this topic — which, by the way, is the average number of minutes of sleep lost by Americans this weekend, and more on that later — I am here to assure you that, as you stumble through the next few days, you’re not alone.

Check out the article Here’s a Horrifying Picture Of What Sleep Loss Will Do To You  in HuffPost, or any of a jillion other sources on the Interwebs, or just trust me. Think back to that average sleep loss of 40 minutes, which I figure on an individual basis could be anywhere from 20 minutes to nearly an hour and a half. Losing sleep, even an hour, even for one night, is bad for you. Really bad, in our already sleep-deprived culture. Not only does it make you tired and grumpy, it makes you ugly (I’m not making this up; there was a study done in which people were shown photos of faces of individuals they didn’t know, nor did they know anything about them. The subjects consistently rated the photos of people who’d had less sleep as less attractive). 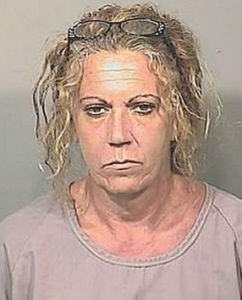 It also makes you a slouch at work: a 2012 study published in the Journal of Applied Psychology revealed a spike in “cyberloafing” or goofing around online instead of working (so perhaps I have “spring forward” to thank for you reading this post).

In the days following the spring time change, there is a sharp increase in the number and severity of workplace injuries. There is  a 6% spike in car accidents in the US, and maybe that doesn’t sound like a lot, but it results in over 300 deaths. We can also look forward to an increased risk of the most common form of stroke and a higher short-term incidence of heart attacks.

And if the time change doesn’t kill you, it can still make you fat. Sleep deprivation increases the release of the hormone ghrelin, which makes you hungry, and it decreases the release of another hormone, leptin, which helps you feel satisfied when you eat. At the same time, your insulin resistance increases, which means your body is  likely to store more calories as fat. 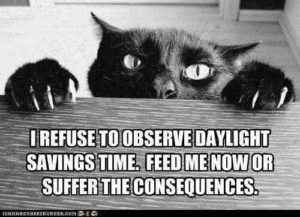 Thanks a lot, DST.

Why do we do this to ourselves? National Geographic has a fascinating article, The Strange 100-Year History of Daylight Saving Time, that does a great job of explaining how we got here. Without getting into the weeds, it has a lot to do with World War I, when the Germans adopted the idea and therefore were able to save a lot of energy because they, like other industrialized nations at the time, depended mostly on coal. More daylight, less coal burned. So then everybody else had to follow suit.

Since we don’t rely on coal so much anymore, the energy savings thing is pretty much a moot point. Yet here we are, 100 years on, still stuck with DST no matter how much many of us whine about it. 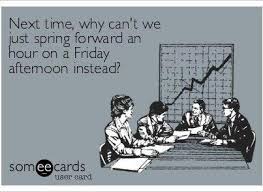 There are some hold-outs. The state of Hawaii is too laid back to bother with DST, and Arizona is having none of it either. The last thing anybody in Arizona needs is another hour of roasting in the sun. Except, and here’s how weird and arbitrary the whole thing gets, for the Navajo Nation, whose vast reservation incorporates part of Arizona.  The Navajo observe daylight saving. But the Hopi do not on their reservation, which lies entirely inside Navajo Nation. Also there is a slender branch of Navajo Nation that extends into the Hopi res, and yes, that small section does observe DST. 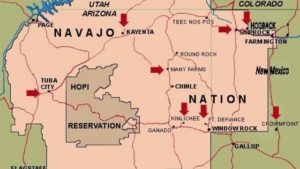 So if you’re driving through eastern Arizona between March and November, forget about the clock in your car.

You can find helpful tips about how to cope with the time change, and those tips are about as helpful as you’d expect them to be. One article chirrups that we should go to bed and rise earlier in the days leading up to the DST to help us adjust. Like we even remember about Spring Forward until somebody at work happens to mention it on that Friday afternoon. Also we should avoid caffeine after lunch, so good luck in that afternoon meeting you have scheduled, and we should refrain from napping (more good luck with that meeting). And we might want to take public transportation rather than driving for a few days.

Like the bus driver isn’t just as wrecked as we are. 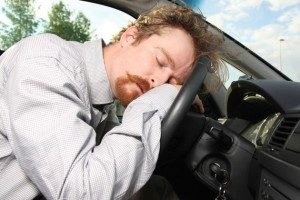 I admit that it’s nice to have an extra hour of daylight as the days grow warm and pleasant, a benefit that will last for months while the adjustment period is only a few days. That is, for everyone who doesn’t have a major heart attack or car crash. Tough luck for those people. 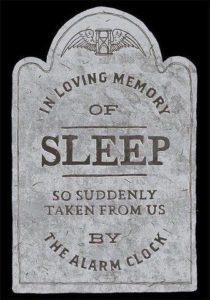 How about we pick either Standard Time or Daylight Saving Time and just stick with it? After all, they manage just fine in China, India and Japan. Can nearly half the world’s population be wrong?

How about you? Do you embrace Spring Forward or does it turn you into a curmudgeon like me? Please leave a comment, before you go take a catnap. 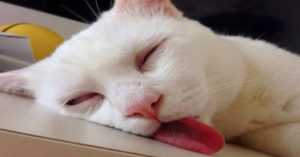