Oy. Today was the first day of state standards testing week in eighth grade. I 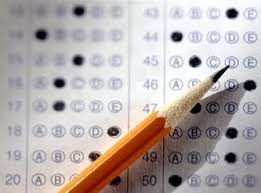 spent the interlude before school started gathering the secured test booklets, answer sheets, directions, pencils, and familiarizing myself with the protocol. By the time I was up to speed, my first period class was already wandering into my room. I make it a practice to greet each class at the door when they enter — it helps set a businesslike tone — but you know what they say about plans and making God laugh.

Nobody likes test week: not the kids, not the harried administration, and certainly not the teachers for whom it means yet another scrambled schedule and a vast interruption of precious instructional time. Well, somebody likes testing, or there wouldn’t be ever so much of it, and it’s probably wonderful if you happen to have the contract to develop and publish said tests. For those in the trenches, it’s a royal pain.

But according to the way we execute education in this country (and you can take the meaning of that phrase however you choose), it’s considered necessary. And very, very serious. The directions are exquisitely specific. There is legalese surrounding a teacher’s every move when it comes to test week. The distribution and collection of test materials, pencils, and even scratch paper is supposed to be carried out with the gravity one would assign to top secret dossiers.

So once the bell had rung and we had all recited the Pledge of Allegiance and sat through the mostly unintelligible morning announcements that drone over the P.A, I rang the little classroom bell to focus their attention, and began my scripted instruction. First, I asked for quiet.

I waited again for their attention. Perhaps a third of the room had their eyes on me, regarding me with pallid interest as another third chattered and joked for the benefit of the remaining third, who served as their sniggering audience. Names began to bloom on the “refocus” board, some of them swiftly sprouting check marks for subsequent infractions. I distributed a few answer sheets before I realized that they contained, in minute font, the names of the particular student who was to receive each one, so had to swiftly retrieve them and begin handing them out again.

It was as though I had announced the party had started.

More pinging of the bell, more names on the board, more stern requests for attention and quiet, more warning looks shot around the room until I felt like the  most crotchety, pickle-faced school marm that ever wielded a ruler.

Of course, we don’t wield rulers for anything but measurement in today’s classroom, and that’s as it should be. But what also should be is that appropriately developed thirteen year olds can sit down and shut up long enough to take a test.

It took a half hour for everyone to get oriented and ready to actually begin testing — a procedure that shouldn’t have taken more than twelve minutes, tops.

At the end of the first testing period (by which time the kids and I were heartily tired of each other and of the blasted test), I promise I was very calm when I explained, “I understand that it’s not great fun to come in on a Monday morning and be quiet for an hour. But at the age of thirteen, it is something you are expected to be able to do.” They heard me. I think. Things went a bit better during the second test.

Still I had to ask myself, what is going on here? These are perfectly normal kids; good-natured, a few class clowns, a few limit-testers, but no young hoodlums, nobody actively hostile. They’re small-town kids in a very nice school in a mostly affluent community. Certainly there are economic disparities — there are students whose parents own wineries, and others whose parents may harvest the grapes — but no searing poverty, no inner-city desperation driving them to antisocial behavior.

I fear there is a bit more at work than simple early adolescent wiggles and giggles. Emerging research on the teenage brain suggests that our 24/7 devotion to electronic devices may have worrisome implications. Could that be behind some of  my students’ inability to focus, to ignore distraction for longer than 30 seconds at a time? 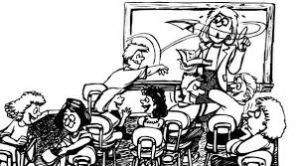 I am eager to see the new movie Screenagers, which treats of this very issue. What I am gathering is that the explosive growth and plasticity of the adolescent brain that make it such a fertile bed for learning also set it up for the dangerous allure of constantly oscillating images. With smart phones, computers, televisions, and video games, teens currently spend an average of something like 6.5 hours a day in front of some kind of screen, and that does not include in-school academic online time. Yikes.

So limit your kid’s time on the screens, parents. Hah! Easy for me to say, whose
kids are adults with their brains already set into functional configurations. Everything in modern life, it seems, conspires against parents who have to worry about the rapidly evolving cyber landscape confronting their kids while also keeping up with a quadrillion other obligations.

Still, it’s worth chipping away at. The good news is that kids’ brains are also still very resilient at this age, able to adapt healthily if given a chance. So, whatever you can do. Here’s a happy thought: the eighth grade at our middle school is looking forward to a four-day trip to Yosemite next week (and hats off to the heroic and dedicated teachers who arrange and supervise this expedition yearly). And the first thing they do when they get on the bus is to turn in their phones, which they won’t see again until Friday.

And here is the second (and final) installment of my story “Sub” (if you missed the beginning, check my post from April 19). I’d love your feedback, so please let me know what you think!

“Well, yes, you’ve picked a real challenge,” says Mrs. S. “You’ve got an understood subject, action verb, and object there. When you say ‘Good luck with that,’ of course, you actually mean ‘I hope you have good luck with that,’ so subject, predicate, and direct object will appear in parentheses . . .”

As she talks, Zach’s hand whips the marker over the board with sure precision, even while the rest of him is spazzing out. He draws straight lines, horizontal, vertical, diagonal, perching words on them in tidy penmanship, all at the same speed at which Mrs. S speaks.

She finishes, and Zach’s hand drops to his side. On the board is a perfectly executed diagram of Zach’s sentence. At least we assume it’s perfect: we’ve never diagramed a sentence in our entire school careers. Who does that anymore?

Mrs. S takes the marker from him gently. “Very nice, Zachary,” she says. “You may be seated.”

Zach spins around on his heels, puppet-marches back to his chair, slumps into it and stares down at the table. We avoid looking at him.

“Do I have other volunteers?” asks Mrs. S. We study the floor. “Well, then, I believe we can move on. The sentence is the building block of the paragraph, and as you’ll be composing your five-paragraph essays for Friday . . .”

The classroom door swings open, and in strolls Jack, fifteen minutes late. “Wassup, teach?” he drawls, giving her a nudge with his elbow as he passes her. We glance up furtively: Jack scans the quiet classroom with disdain. “What, did somebody die in here?” he booms, and laughs. He walks over to the counter at the side of the room and hoists himself up to sit on it. He leans back and relaxes, staring into his phone.

Mrs. S. takes a good look at him before she speaks. “Welcome, Jack. I’m sure you were unavoidably detained. Simply hand me your tardy slip and take your assigned seat, please.”

Our eyes slide to Jack. “Naw,” he drawls, still looking at his phone. “Don’t got it.”

“How inconvenient. I’m afraid I must ask you to go to the office to request a signed slip; otherwise I cannot admit you to class. And please do put away your phone.”

Jack doesn’t look up or move, except to curl his lip. “Like you’re gonna take my phone away,” he scoffs. Jack is the biggest, baddest player on the football team, probably the only reason he hasn’t been expelled by now.

Her smile widens. “No need for that,” she says soothingly. She brushes a hand gently under her chin as she speaks.

There is a brief, strangled-sounding electronic bleep. “What the hell?” mutters Jack, frowning and poking at his phone.

“You may put it away now,” she says, “and do be careful getting down off the counter.”

“Did you do something to my ph . . .OW!” splutters Jack, as he ejects himself off the counter and glares back at it, rubbing the seat of his jeans. He emits a short, angry burst of words that definitely don’t belong in a classroom.

“Oh dear, Jack, I’m afraid you’re losing your composure,” says Mrs. S. “You’ll feel better after your walk to the office and back.” She gives him a sympathetic smile.

Our eyes swivel to Jack again. He’s got that look that makes opposing quarterbacks jelly-kneed, the one that causes freshmen to give him their lunch money. He stalks toward the sub. “I’m not takin’ any bleep from you, you old bleep bleep bleep,” he rumbles, using terms that shock us, which is saying something. We shrink into our seats. We all know Jack has impulse issues, but pounding the lights out of a teacher would be extreme, even for him.

Mrs. S looks sorrowful. “Quite unacceptable, Mr. Simpson. Please do leave the classroom promptly, or I’m afraid I shall have to send you.”

More bleeps from Jack, and parts of his face are turning red. He towers over her, still advancing. We’re holding our breath.

Mrs. S sighs and shakes her head. “I did warn you. Out you go, Jack,” she orders as she points to the door.

“YOU B. . .” starts Jack, and then doubles over with a surprised “Oof!” The classroom door flies open with a crash: beyond it looms a lightning-flecked darkness instead of the familiar corridor. Jack jerks backward toward the door, bent over with arms and legs splayed, as though being hauled by a cable around his middle. His eyes are wide with shock and his mouth works soundlessly. He scrabbles his hands and feet, trying to hang onto something, but he’s sliding faster and faster. Wisps of gray mist reach through the doorway as he nears it, wrapping around him like tendrils. We can see he is screaming, but he can’t make a sound. Already his hips and torso have disappeared into the murk outside: his fingers paddle hopelessly at the doorjamb and his eyes plead with us for a last second.

Then he vanishes. The door swings shut with a grim click.

“Such a regrettable interruption,” remarks Mrs. S. “Where was I? Oh, yes, your five-paragraph essays . . .”

Mr. Petersen returns on Friday, and collects our carefully structured and neatly typed essays, along with an excellent report on our accomplishments and behavior. We don’t see Mrs. S again, but for the rest of the year we are quiet and polite in class, especially with substitutes. The principal appears at the end of the third quarter to congratulate all of us for the improvement in our English grades.

All of us except Jack. Nobody has seen Jack since he was sent out of the room. Maybe he got transferred or something. We don’t talk about it.