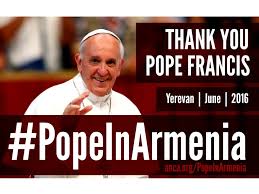 I thought I was a pretty solid Pope Francis fan already, especially for a non-Catholic. But my admiration for him took another big bump skyward about three weeks ago when he visited Yerevan, Armenia. There, at a memorial to the victims of the slaughter of Armenians at the hands of the Turkish government in 1915, he departed from his carefully worded script.

“ . . . This tragedy, this genocide, has unfortunately marked the start of a sad series of great catastrophes of the last century,” said the Pontiff, and in that one sentence he both named the event for what it was and explained why it should matter to all of us, not only the members of the Armenian diaspora.

For the second time in two years, the Pope employed the term “genocide” to describe the attempts of the Young Turk leadership to systematically eliminate its entire Armenian population during a period when much of the world was preoccupied with the Great War in Europe. In so doing, the Pope added his moral authority to the scores of nations and international organizations who have officially recognized the Armenian Genocide.

The government of Turkey is most unhappy with Francis. Last spring, when the Pope publicly described the events of 1915 as a genocide, Turkish president Erdogan fumed, “I condemn the pope and would like to warn him not to make similar mistakes again.” After which Turkey withdrew its Vatican envoy for a ten-month period. And here the Pope goes and does it again.

I can only imagine how furious Erdogan is now. In Turkey, genocide denial is a 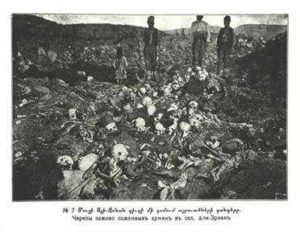 matter of national policy. You can get in real trouble there for employing the G-word, despite the abundant documentation and evidence that supports its use. In December 2008, two hundred Turkish intellectuals signed a public apology to the Armenian people but were necessarily constrained, referring to what happened as “the great catastrophe of 1915.”

There is a lot of power in a word.

And here’s why it’s a big deal: to this day, the vast majority of non-Armenians are only dimly aware of the first state-sponsored genocide of the 20th century, if they’ve heard of it at all. And yet it became the template for what came after, over and over again, throughout the world. Before invading Poland in 1939, Hitler is quoted as saying,

“ . . . I have placed my death-head formations in readiness for the present only in the East with orders to them to send to death mercilessly and without compassion, men, women, and children of Polish derivation and language. Only thus shall we gain the living space, which we need. Who, after all, speaks today of the annihilation of the Armenians?”

The point of acknowledging a wrong is not to invite punishment. Nobody alive in Turkey today carried out these acts. But their effect lives on in the families of those who survived, and wounds don’t heal in the dark. Nor do those who are identified with the ones who did the wounding given the chance to find peace.

Germany acknowledges the Jewish Holocaust, openly and honestly. And thus as a 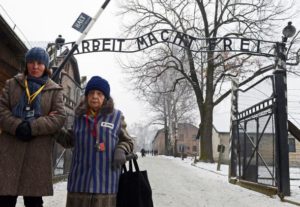 nation it has moved on and reclaimed its place as a leading nation, its own moral authority. It is one of the countries that has called on Turkey, its ally in both World Wars, to do the same (and wow, does that cause aggravation in Ankara!).

Alas, the denial is outliving the survivors who can tell their stories firsthand. That’s why I feel a sense of mission about the book I’m writing, The Moon Ran After Her. It’s a work of fiction, but based closely on the experiences of my late husband’s Armenian grandmother who narrowly escaped and who suffered heartbreaking loss in the process.  When she was in her 80’s, we recorded her story and I transcribed it for family members. Until her death at the age of 98, never once did I hear Grandma Aghvani utter a harsh word against Turks or Turkey. She was a woman who understood forgiveness.

But I’ve never felt done with her story. It wants out; it wants to reach an audience beyond her descendants, beyond even those of Armenian heritage. Like any narrative set in a time of historical cataclysm, it’s a tale of survival, of endurance, and finally of triumph. I just hope I do Grandma proud.

And thank you, Pope Francis.