Back in February, I blogged about slogging along with the first draft of my second novel (working title: Glory Days), and how the finish line seemed to keep receding as I tried to approach it. But. One day late last week I was beavering away, pushing myself to get my quota of 2,000 words in for the day, and at Word 1833 it hit me. I had reached a conclusion. And by conclusion, I mean the end of my story. 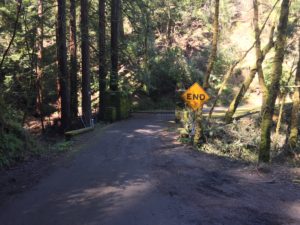 At least, enough of an end. For now. The thing about first drafts, as anyone with any claim to writing expertise will tell you, is that they are not to be judged. A rough draft is just that: rough. It’s raw material, like the lava flowing from Mt. Kilauea on the Big Island of Hawaii. It has form, it exists, it’s the newest real estate on Earth. But it’s still steaming and stinking. It needs lots of time and effort before it becomes a lush tropical paradise. 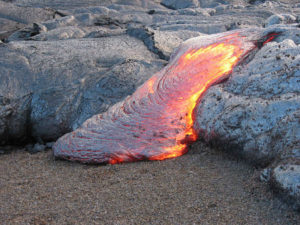 Meanwhile, it needs to cool off. Approach it too soon, and its fumes can fry your brain. That’s why wise writers put their drafts away for a stretch before they even attempt to revise them. It’s necessary to get some distance. Personally, I find it helpful when it gets to the point where I can look at my manuscript with a sense of dim recognition (did I write that?). 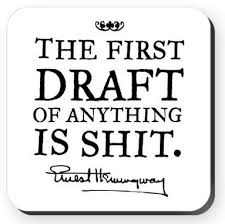 You would think I would be ecstatic at getting to this point. Joyce Carol Oates noted that “Getting the first draft finished is like pushing a peanut with your nose across a very dirty floor.” So, that part’s done. Yippee! Indeed, on that day as I sat there blinking at my computer screen, absorbing the idea that I was indeed at a place where I could and should stop, I felt enormous relief.

For ten minutes. Okay, that’s an exaggeration. But it didn’t take long for the relief to morph into a sort of low-level unease, a creeping sense of purposeless, one of the many species of anxiety to which I am so exquisitely prone. You have probably experienced something like this — minus, I hope, the anxiety — when coming to the end of a creative project, or any intense and protracted endeavor. For days or weeks or months you’ve been preoccupied with wrestling the thing into being, or training for the race, or producing the event, and then at some point it’s accomplished. And now there’s all that space left in your day and your brain where the thing used to be. 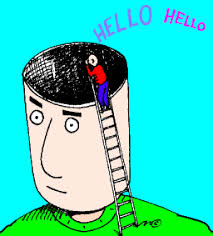 It’s natural that the achievement balloon carries a certain ballast, a feeling of let down. To counter this, we engineer rituals: graduation ceremonies, wrap parties, gallery exhibits, post-championship bacchanals, even Friday night happy hour with the work buddies after a tough week. These assist us in registering the end of an endeavor while giving us a break and a segue into the next one. 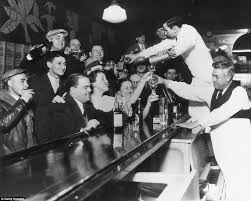 The hitch with finishing a first draft is, it’s a silent, private, decidedly un-public accomplishment, one in which the final outcome is far from assured. We’re not at all sure, at this point, if we have produced the matrix of the Great American Novel or simply a hot mess of toxic ooze. It doesn’t seem time to pop the champagne corks. 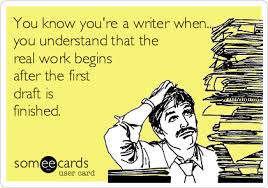 Maybe that’s a mistake; perhaps I should reward myself for getting this far. It’s not every day you finish a novel, after all. There are those shoes I’ve been wanting . . . 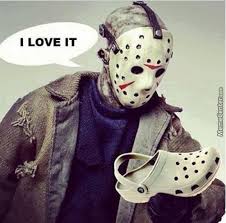 But, see, I’m still in postpartum shock. This squirming bundle is a godawful long way from marching into the world, diploma in hand, and I know it. At some point I will have to drag the thing back out into the light (there goes the infant metaphor; forget I employed it, please) and begin the revision process. Print the manuscript out, read it, and figure out how to carve it up and whittle it down and put the whole thing back together. Right now it has characters that are introduced and then disappear without explanation, plot holes you could march a battalion through, scenes that spin on and on without moving the story forward an inch. It’s full of I’ll-figure-it-out-later brackets, usually indicating the need for research (it’s a historical novel), i.e. “She huddled in the rear seat of the **CAR OR WAGON**.” Hey, we’re talking 1915 California; it’s not a slam-dunk answer. 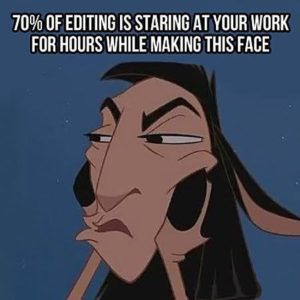 The point is, I’m on hiatus from the story but I’m painfully aware of the mountain I’ve just built to climb. This is another reason for waiting, of that much I’m sure. Back to the misguided childbirth analogy, I need time to forget the pains of laboring the story into existence before I summon the energy to shape it and teach it its manners. And I’ll get there. The cure, I’m told, is to turn my attention to another project. I was talking to a writer buddy of mine just last night, a guy who has finished 15 books in the past ten years. “I don’t get it,” I said to him, “How do you do that?”

Well. There it is. The disease is the cure. Just write.

What about you? Do you ever stall out between projects, and if so, how do you cope? Please comment! 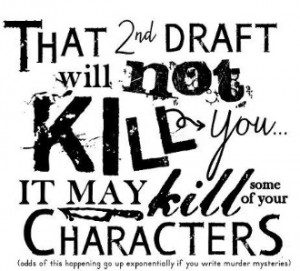