Have you had this experience? You’ve been thinking deeply about something; maybe you’ve been a little obsessed with it, or you’ve been discussing it with someone or using it as the subject of some art you’re making. In any case, it has claimed significant real estate in your psyche. But it’s not something most of your friends and acquaintances are particularly aware of or excited about. It’s not the last election or the latest, stupidest tweets or March Madness (over now, I get that). So you feel a little alone with it. Until your topic erupts into the public consciousness in some form: an event, a news story, or in this case, a movie. If that’s happened to you (my bet is that it has), you know the tingling, breath-catching, eyes-welling sensation. That’s what I felt when someone last week tipped me off to the upcoming movie The Promise. It stars Christian Bale, Oscar Isaac, and Charlotte Le Bon, it was directed by Terry George (who wrote the Oscar-nominated screenplay for Hotel Rwanda), it premiered last September at the Toronto International Film Festival, and it’s being released in the U.S. on April 21 by Open Road Films.

How did I not know this? See, here’s the deal. The movie is billed as a love triangle set against a backdrop of war in the fading days of the Ottoman Empire — okay, so a Dr. Zhivago rehash, right? Except not. The Promise plays out its love story against what looks to be a vividly rendered historical backdrop, the Armenian Genocide. And that, in my I-never-claimed-to-be-humble opinion, is what sets it apart from other period war pieces. Because the Armenian Genocide remains a story largely untold, one that isn’t even officially recognized in the country of its origin (Turkey, where you can get yourself in pretty hot water by making any noise about it at all), nor even, officially, in the United States with the exception of California (excuse me while I  cheer for my home state). And yet this historical episode marked the twentieth century’s first coordinated, government-directed effort to eliminate a minority population, using the newly developed technology that made such a nationwide assault possible (railroads, the telegraph), and it became the deadly template that Hitler employed to launch the Jewish Holocaust.

Still, outside the Armenian community, when you bring up the topic, you get blank stares. Or “Really? I never heard of that,” and maybe some unstated but palpable vibes along the lines of so what do you care, Jan, you’re not Armenian? Fair question. I mean, it’s not like we need to go combing through history to find things to get upset about, right? It’s all we can do to gag down the latest news feeds. Why do we want to wallow in some horrible, depressing past of which we’ve managed, so far, to be blissfully unaware? Even the annual Armenian Genocide Remembrance Day doesn’t get the traction it should. 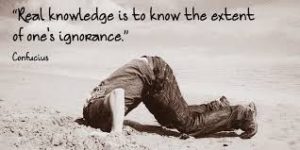 Full disclosure: I do have a personal stake in the topic. For 23 years I was married to an man of Armenian descent, until his death in 2002. So I remain a distaff member of a large, warm Armenian heritage clan (Armenians take family ties very seriously). My late husband’s grandparents all came to America to escape the genocide, part of a generation of hard-working, high-achieving, deeply patriotic Armenian-Americans who not only embraced their new homeland but were determined to contribute to it in every way they knew how. My father-in-law arrived on the beach at Normandy on Day 4 of the D-Day invasion, and earned a Silver Star. He was a self-taught mechanical and electrical engineer who went on to become a prolific inventor. My mother-in-law was the first female disc jockey in California. Like other second-generation Armenian-Americans, they were devout, industrious, civic-minded, and walk-the-talk boosters of the American Dream.

Nobody built a wall to keep them out, and it’s a darn good thing. You see how this subject resonates with the present day, right? 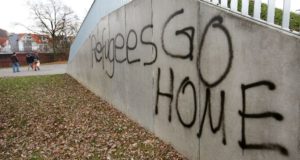 When I was ushered into the family, I knew exactly zero about what had gone on in the crumbling Ottoman Empire at the outset of World War I — a million and a half Armenians displaced, deported, and mostly killed via starvation, abuse, exposure, or outright murder. I was appalled and fascinated. How was it that I had never heard of this? In 1979, my husband and I spent a series of evenings with his paternal grandmother to record the story of her survival and escape to this country. I typed up the transcripts on my trusty IBM Selectric, added a few notes and comments, and made Xerox copies for the family as an Easter present that year. And, I thought, that was that. 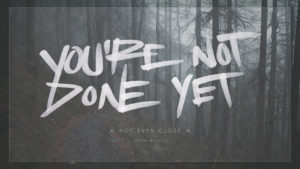 But it wasn’t. Grandma Aghvni’s story stayed with me for decades, along with the stories I’d picked up about the other women in the family, those sweet, motherly, bossy, energetic, dolma-wielding ladies who it turns out had lived through horrors. Their stories wouldn’t leave me alone, even though I let them marinate for a very long time indeed. At last, in 2015, I began the first draft of a novel, The Moon Ran After Her, a fictionalized account based closely on an amalgam of their accounts. It felt like an audacious thing for a non-Armenian to do. There are a few very fine novels on the topic of the Genocide, but they’re all by writers of Armenian descent: Carol Edgarian’s Rise the Euphrates, Chris Bohjalian’s The Sandcastle Girls, Mark T. Mustian’s The Gendarme, Aline Ohanessian’s Orhan’s Inheritance, as well as Peter Balakian’s memoir, The Black Dog of Fate. So it took some nerve, but I couldn’t not write my book. It wouldn’t let me. 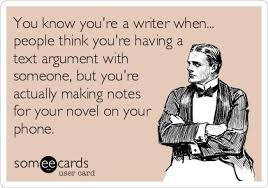 Moon is in its seventh draft, approximately, and I’m in the process of finding an agent (as of this writing, I have some interest, but let’s not jinx things by thinking about that too hard). A chapter excerpt did win first place in a writer’s conference contest in Mendocino, so it’s coming out next month in the Noyo River Review (fun fact: this year’s issue will feature cover art by my now/second/current — I detest all those qualifiers — eminently talented husband, whose work you can check out on his site at JMichaelFlynn.com). 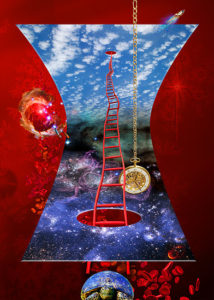 All The Way Down, J. Michael Flynn

So, yep, I’m pretty excited about The Promise. Just watching the trailer made me gasp: there are some shots that are like seeing Grandma Aghvni’s memories, and the pages of my own book, spring to life. Whether it’s a good thing for the prospects of my novel or not, who knows. But the story is getting out there. It’s gaining traction. It’s claiming its turf in the zeitgeist. And that is a very good thing.

Has something like this happened to you? And have I whet your interest in The Promise? Please comment!