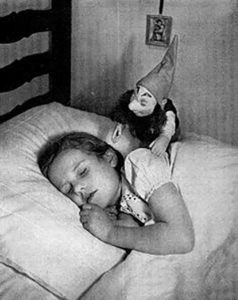 Ever had your sleep examined? All night long? With a video camera trained on you, your rumpled pjs and your sleep-slackened mouth? I have. Three times. I will spare you the story as to why that is so. But the experience itself —  my most recent study took place this weekend — beats any other medical procedure I’ve had for its surreality. And then there’s the people you meet.

On a Friday evening, after a particularly harrowing day at work and an early, caffeine-and-alcohol-free dinner, I drive an hour and then some to the sleep lab.

These places don’t just pop up in every strip mall, after all. My appointment is at 8PM, and when I check in the receptionist is yawning.

“Do they pay you to do that?” I ask. The receptionist chuckles sleepily. Her shift is over once the night’s patients have checked in. It’s my sleep technician who will be taking over from here. Meanwhile I fill out the first of a series of forms and am shown the Keurig coffee maker where I will be able to access a complimentary hot beverage in the morning, with the implication it’s a reward for making it through the night. The building itself is clean, modern, and hushed, with soothing artwork but no windows to the outside once I’ve progressed past the foyer.

My technician, a young woman we’ll call Marlena, arrives. In spotless scrubs and a lab coat, she is is friendly but professional as she conducts me along a hallway, pointing out  the shared bathroom and the emergency exit before we reach Room 3, my sleep room for the night. Room 3 looks like something in a three-star chain hotel, minus the en suite loo or workstation or closet. The bed is king-sized, made up with tastefully neutral linens and a white coverlet, and would look inviting were it not for the array of wires and electrodes arranged on its surface. 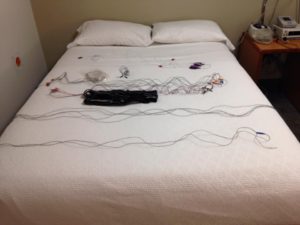 There are no mirrors.

Marlena points out the room’s important features: the bedside lamp, the just-in-case flashlight, the coy location of the camera which will be watching my every move or lack of same from now until I leave in the morning. As she does so,  I fall into conjecture. Why does someone choose a job like this, spending all night in a silent lab, watching strangers toss and turn? Despite Marlena’s fresh complexion and her slight Midwestern accent, I notice the Eastern European last name on her I.D. badge.

With practiced dexterity, Marlena begins draping wires along my limbs and sticking electrodes and terminals to points on my body. I have followed the sleep center’s directions and am wearing full two-piece pajamas, so the process is discreet (how did the sleep center learn that it’s necessary to instruct patients to wear pajamas, I wonder, imagining the awkward situations that must have led them to this conclusion). Then she has me sit in a chair while she begins pasting and taping yet more terminals to my face and scalp. It’s a lengthy process, so we have time to chat. 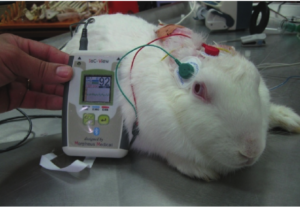 “What drew you to become a sleep technician?” I ask once we’ve established fledgling rapport.

With a smile of weary amusement, she says, “Oh, you know how life is. Takes you in a different direction, sometimes, from what you’d originally planned.”

Or ‘turns’ you, I think, but do not say. Instead I ask, “It doesn’t bother you, working at night?”

Again that impenetrable smile, which does not reveal her teeth. “You get used to it; it’s really not so bad.”

It’s clear she is not interested in pursuing this line of inquiry further. I consider asking her about her meal breaks, wondering what exactly she might stow in the staff fridge to keep her going during the graveyard shift. Does she prefer Type A or Type O?  I refrain. I’m already enshrouded in wires and tape and Velcro belts around my chest and abdomen; best just to go with the flow. I hope that’s not an unfortunate turn of phrase.

Our conversation turns to books. Marlena is an avid reader who favors the classics: she has just finished rereading Madame Bovary, and she adores Jane Austen. Naturally, I think, speculating as to Marlena’s real age. Perhaps she knew them both. Now that I consider it, there is something rather 18th century about her face and figure, her abundant chestnut hair. Replace the scrubs with an empire-waisted gown and shawl, and she’d look right at home in … 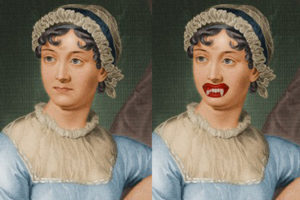 “All right, now I’m going to ask you to get into bed,” says Marlena, interrupting my reverie, “and I’ll plug you into the terminal.” Another uncomfortable choice of words, but I comply, clambering into bed with the grace of an electrified zombie. Marlena inserts the ends of all the wires into a contraption somewhere behind the headboard, checks to make sure I’m correctly arranged and as comfortable as I’m likely to get, and exits the now-darkened room.  “Sweet dreams,” she says as she closes the door. 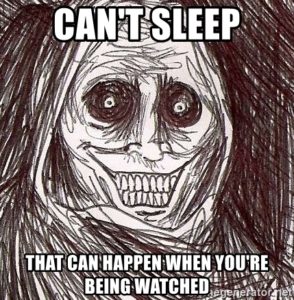 I read my Kindle and focus on relaxing as best I can. Moments later, Marlena’s disembodied voice floats into the room from somewhere in the ceiling. She directs me to perform a series of actions, I assume to form a baseline for the monitors: breathe five times through my nose only, then my mouth only, look up and down five times, blink five times, grind my teeth, make a snoring noise. Once that’s done, she softly bids me goodnight.

I have paste and tape all over my face, I’m tangled in wires, and there are tiny, tickling probes in my nostrils, but at some point I actually do manage to fall asleep. I dream vaguely of uncomfortable hats,  or are they bats? I rouse now and again to wonder if it’s morning yet or if indeed the world outside still exists. No one enters my room during the night and I am left undisturbed. As far as I know. 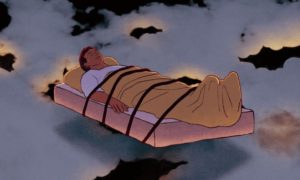 Shortly after 5AM, Marlena’s voice purrs through the speaker again, bidding me good morning. A moment later she enters the room, bright fluorescent light from the hallway jolting me into true wakefulness. It takes her a good twenty minutes to defuse me and pry all the adhesive off of my skin, during which time she keeps up a pleasant, soft-voiced banter. “How did you sleep?” she asks at one point.

“Don’t you know?” I reply, and she laughs. Without showing her teeth.

Once freed, I am allowed to shower off the glue and wax and whatever else is stuck in my hair. I dress quickly, fill out one last form, and collect my things. Marlena conducts me back to the reception area, waves vaguely at the Keurig, bids me a good day, and retreats to the building’s interior as the first light of dawn begins to penetrate the foyer.

Sipping my coffee, I drive the near-deserted highway back home, checking for puncture wounds. I find none. There is, however, a tender spot on the left side of my neck where the tape pulled off a micro-layer of skin. Probably.

Just because a well-spoken person with an engaging manner and good taste in literature works in a sleep lab doesn’t automatically make her a vampire. But as the sun climbs into the sky above Napa Valley, I consider Occam’s razor: the simplest explanation is usually the best. 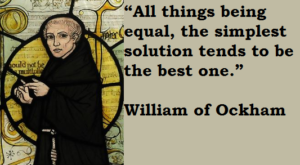 Have you had any experiences in which other dimensions may have seeped into your daily reality? Or any encounters with the possibly undead or otherwise unconventionally animated? By all means, comment and share!