I assume that you are fond of wine. Given the current stats, according to the Wine Institute — the per capita consumption of wine in the U.S. was 2.83 gallons in 2015 and climbing every year — I’m making a pretty safe bet. In fact, the nearly seven minutes of  research I have devoted to the topic reveals that the sheer number of gallons of table wine consumed in America has risen from 88 million in 1967 (a year I chose because it was the Summer of Love, although that had less to do with wine than it did with wildly laced sugar cubes) to 779 million in 2015, the most recent year for which there are statistics, and that’s quite enough of that kind of talk. 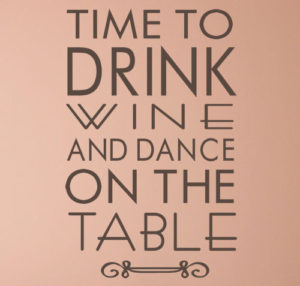 The point is, a lot of us loooooove wine. I do. And lucky me, I happen to live smack dab in the pulsing heart of California’s most famous, and certainly most self-regarding, wine country, the upper Napa Valley. I hold no direct association of any kind with the wine industry, but living here I am literally surrounded by premier vineyards, and that’s enough to earn me respect from waiters and wine stewards when I travel out of state should the topic of where I’m from somehow come up, which I am shameless enough to make certain it does. Wine-by-the-glass upgrades tend to come easily to me when I’m in Colorado or Idaho.

I am no wine expert, no connoisseur, and barely a knowledgeable consumer. Still, simply by virtue of residing in St. Helena, where it’s a given that one will take one’s visitors on one or more winery tours, I’ve picked up a few things. It doesn’t take long to accumulate a store of snooty wine terms: malolactic fermentation; residual sugar; brix; neutral oak; or to learn the critical importance of an AVA appellation, or that the term “wine thief” doesn’t mean what you think it does. 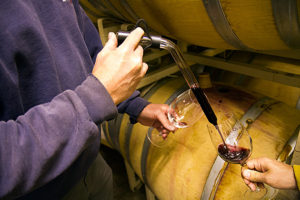 (this is a wine thief. the glass thing, not the guy using it)

The mystique that enwreathes the world of wine is vast and multilayered. It includes its own hierarchy of adepts, winemakers and sommeliers and a few high priests such as Robert M. Parker, Jr. of The Wine Advocate fame. But when it comes right down to it, the whole enterprise is pretty basic. In its essence it amounts to grapes, sunlight, and dirt, as well as the rhythm of the seasons, which in Napa Valley tend to favor the yummiest potentials of the vines’ extrusions. Even, so far, in this era of climactic upheaval. Let’s all keep our fingers crossed. 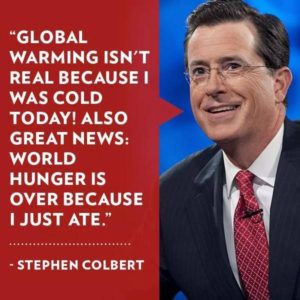 On my daily walks with the dog, I’ve been watching the progress of the 2017 vintage. After the spectacularly colorful die-off of the previous year’s grape leaves (we may not be New England, but autumn in the vineyards is nothing to sneeze at) and the vines’ winter dormancy, seeing the gnarled knuckles of the pruned vines erupt into another cycle of Dionysian abundance is wondrous and life-affirming. Bud break, when the first sprouts of green emerge from the tips of the canes, happens in early to mid March. Here’s what it looked like this year in our neighborhood: 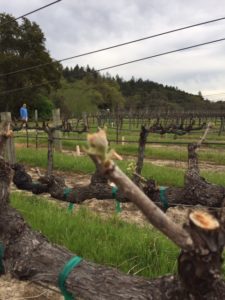 Once the new growth has escaped its woody chrysalis, it unfolds with surprising speed, like reverse-engineered bio-origami. Leaves unfurl, declare their shape, and take on size. The wires you see in the image below are not telephone lines but training supports for the vines that will soon overreach them. 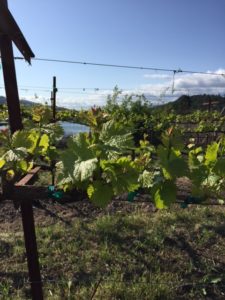 By late April, the vines are well on their way and the valley floor is awash with subtly varying shades of tender green. The hoary and twisted zinfandel vines at the far end of our daily trail, the ones that grow next to the library, begin to soften with their new growth. 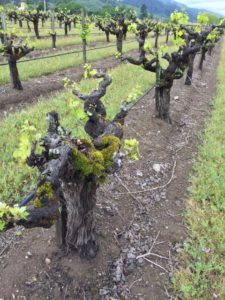 And by now, the first weekend in May, the grapes themselves are already forming miniature, upright bunches that will, over the next three months, swell and ripen and droop earthwards with their weight of juice. By the time we’re watching July fireworks and eating locally sourced gourmet hot dogs from  Long Meadow Ranch, the valley’s winemakers will already be testing sugar levels and speculating on the number of days to harvest. 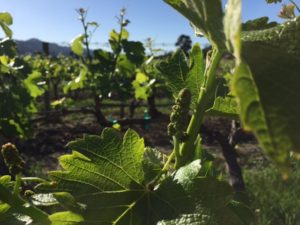 For the vineyard owners and wineries and all the tributaries of the economic river of wine that is Napa Valley’s life blood, there is a great deal riding on the outcome of this year’s vintage, as there is every year. Beneath the bucolic vista lurks a lot of pressure and competition — but not for those like me, who are merely wine spectators in the simplest sense. For me, watching the steady unfurling of the current vintage is soothing, and in these wildly uncertain times, deeply reassuring.

If the world is going to hell in a hand basket, I’m going to make sure my basket includes some bottles of the good stuff. 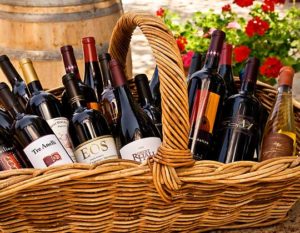 Cheers to you — and please comment: what do you find life-affirming in your environment? Do share! We could all use a dose.