Don’t worry. This post is not 50,000 words long. It’s a shout-out to NanoWrimo, or National Novel Writing Month, which is in its last week right now.

If you’re not familiar, the challenge of NanoWrimo is to write a novel — or at least 50,000 words of a novel — within the 30 days of November. The rules are simple: you can outline or plan your plot or do research or fill out a gazillion note cards or whatever prewriting suits you in advance, but no writing the actual draft until Halloween has come and gone.

On November 1, it’s go time. Writing 50,000 words in 30 days means you need to churn out an average of 1,666 words every single day of the month. And maybe you want to take Thanksgiving off, so that means you have to beat that goal at least a few times.

So you open a file, and start tapping those keys with creative abandon, or maybe grim determination. As somebody smart said, you can’t revise a blank page. Save your judgment of your work for later, like when your work actually exists.

Unless you lead a life of leisure, you will need to carve out time to do this. That’s also the point of Nano: to demonstrate that yes, you do have time to write. You can do it in bursts of a few minutes at a time throughout the day, or set aside a block of time when everyone in your life knows not to interrupt you unless death is on the line, and maybe not even then.

What you won’t be able to do is to stare at your screen and wait for inspiration to arrive like the Blue Fairy. Nor will you be able to critique or tweak or otherwise freak out as to the merit of your writing, not if you want to hit your word count goal. But here’s the thing: until you try it, you won’t believe how fast you can crank out those words. I’ve tested myself on this many times, and when I’m brainstorming or free writing or exploring an idea, I can bang out over 1,000 words inside of twenty minutes. They might not be worthy of a Hemingway, but as Papa himself famously said, everyone’s first draft is <bleep>.

Lots of us who aspire to write are hindered by our perfectionism, by that pointy- 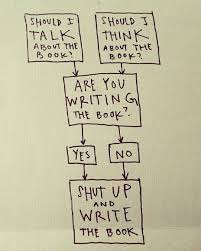 headed inner critic who just won’t shut up while we’re trying to give form to our ideas. Writing at a breathless pace may not silence your critic entirely, but it will relegate its nagging voice to a background hum.

The whole Nano concept is to empower writers — or those who have always wanted to write a book, and meant to write a book, but just haven’t found a way to make it happen, because let’s face it, writing a book is a monumental undertaking and one that can stop you in your tracks the moment you finally sit down to a blank screen on your laptop — by proving that it can in fact be done.

To participate along with the over 400,000 people each year all over the globe

who do, you sign up at the Nano website (they make it easy) and “claim” your novel. Give it a title. Write a sentence or two to describe it. Don’t overthink this step; the point is simply to give your work some reality and to state your intention. You can call your novel “Bob,” if you want to, and describe it thus: “Bob: the Novel is about Bob, who is just an idea but desperately wants to grow up and become a book if only his author can find the time and chocolate to write him.” If you’ve never done it before, this step takes some courage, but it’s also a thrill, like signing up for your first marathon.

Or so I imagine. I’ve never signed myself up for a marathon myself, and remain serenely confident that I never will.

But you catch my drift. Taking on a vast and self-imposed challenge like writing a novel is fraught with the potential for failure if you’re lacking two things: encouragement and accountability. For professionals, that usually boils down to a royalty check and a deadline. For Nano writers, that means tracking daily word counts on a nifty personal goal tracker, earning virtual achievement badges as you go. Before I did my first Nano, that sounded to me like a big so-what, until I got underway and found out I would practically wear my fingers down to the knuckle to earn that next badge. It’s ridiculously reinforcing, and if that makes me a pigeon in a Skinner box, then I’m a pigeon with two complete novels and a short story collection under my belt, all begun as Nano projects.

This year, I had an idea that excited me but no outline or structure or even a plot. For me working without a structure is like tap dancing on a high wire without a net. But I was out of dithering time, so on November 1, into the virtual literary wilderness I hiked with no map in hand. And, surprise, I discovered story lines and characters and conflicts emerging onto the page, apparently proceeding from my brain. Who knew all that was rattling around up there?

some. I’ve copied and pasted the whole enchilada into the Nano word count confirmation screen and claimed my win. No, nobody is going to read my rough draft; the website just checks the count to keep everything honest.

What I now have at the end of the month is not a novel. It’s a big, raw, steaming pile of raw material in need of shaping into something presentable. But it exists, and on October 31 it did not. That’s something right there.

So, happy long-form writing or long-distance running or whatever stretches you toward your dreams. Go for it.