So I attended a high school reunion this weekend. It’s been a long time since I’ve been to a reunion, and much longer than that since I graduated. Let’s just say there are middle-aged people walking around today who weren’t born when I wore the Carlmont High School cap and gown. 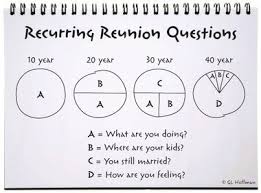 The reunion was lovely, made even more meaningful by recalling that some of 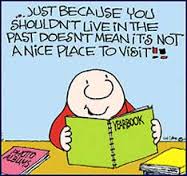 the folks there I had known not only in high school, but farther back through junior high, elementary, even kindergarten. These folks and I have history.

One of my longest-standing former classmates, Carin, reminded me that she and I once belonged to the same Brownie troop. She could even remember all the words to the Brownie theme song. Clearly she has taken better care of her brain than I have of mine.

But I do recall my internal conflict in second grade, when I was faced with a stark social choice: whether to become a Brownie or a Bluebird.

Brownies or Bluebirds: all of the primary grade girls at MacDougall were either

one or the other. Brownies were the female equivalent of Cub Scouts. Successful
completion of Brownie-hood led to promotion as a Girl Scout. This was by far the most obvious and popular choice. The path taken by Bluebirds led to joining the dwindling ranks of the Campfire Girls, already an endangered species.

But the Bluebirds held a bohemian, underdog attraction for me. And I liked the Bluebird uniforms so much better. 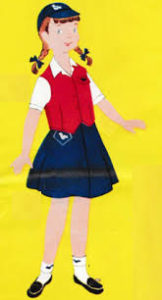 beanie with a tiny visor, which, when taken with the entire ensemble, was downright jaunty. Thus my decision was made. Being all of seven years old, I was untroubled by the gulf that yawned between my actual appearance and the image of myself that dwelt in my imagination, and I couldn’t wait to show off my new Bluebird plumage and outshine the drab Brownies.

My Bluebird vest, as it turned out, fit me rather too closely, its little brass buttons straining to bridge the gaps over my robust tummy. The hat jammed down tightly over my straight bowl haircut, causing wisps to jut straight out sideways around my ears. What really set the look off, however, was how it all went together with my glasses.

To my mother’s great credit, she had allowed me to make my own choice of frames. I went straight for the pearly blue cat’s eye frames with the rhinestone-studded, upturned corners. The sting of having to wear glasses to school was instantly overcome by the glamour of those frames.

By the time picture day rolled around, I had both my Bluebird uniform and my glasses and arrived at school sporting the full regalia. Thus was produced the most memorable of my grade school portraits: seven-year-old me in black and white, my round face sporting a proud grin above a couple of chins, beanie hat slammed down over jutting hair, eyes weirdly magnified by the garish spectacles, pudgy neck disappearing into the snug kerchief and straining vest. At age seven, I was delighted with my picture.

By age ten, I was horrified by it.

By that age, in fifth grade, I had defected from the quickly diminishing ranks of the Bluebirds to the dominant Brownies and spent a short time as a bored and mutinous Girl Scout. Abandoning Scout-hood altogether, I became an outlier, embarking on a long, agonizing quest to find my niche.

By the time I entered eighth grade, I thought I had left the chubby, grinning Bluebird behind, safely buried in the dust of the past.

On the day of eighth grade graduation, the entire student body assembled in the multi-purpose room, the eighth graders seated in the front rows, our attention directed to the big screen that hung above the stage. The principal announced that the eighth grade homeroom teachers had prepared a treat for the graduates.

One by one, photos from students’ past school years appeared on the screen, as the teachers called out their names. There were smiles and good-natured chuckles. It was a large school and the progression of pictures went on and on.

“And last but not least,” boomed the voice of my algebra teacher, jolting me out of my reverie, “here is Jan, from Room 8C!” Suddenly the big screen was filled with

a crooked image of The Bluebird, grinning madly at all of Ralston Intermediate from behind her tilted, sparkly glasses. A roar of laughter went up from every throat. I saw a couple of teachers actually double over in mirth.

It was clear that I would never fully escape The Bluebird.

It was decades before I came to peace with her, and it was through the grace of my husband Michael that I did so. In the course of a ruthless downsizing that we underwent in 2008, Michael had gone through albums and boxes and piles of photos. One day I came into Michael’s office to find The Bluebird displayed on his desk, and my first reaction was to roll my eyes.

“Really, does that have to live on your desk?” I protested.

“But look at her,” he said, his eyes tender. “She’s wonderful. That’s your spirit, in that picture. That’s my Bluebird of Happiness.”

And at last, after all those decades, I saw The Bluebird for who she was. She was 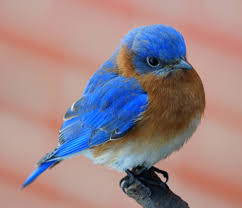 happy. She was weird. She was, deeply and enduringly, me.