SO excited, folks . . . one of my stories, “Itself”, is included in this new anthology from Lit Select! 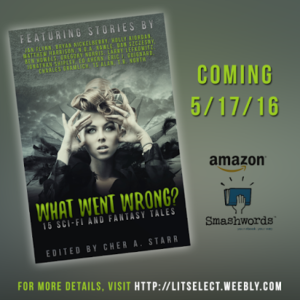 Huge thanks to author N.O.A. Rawles for rolling out the official cover reveal on May 1! This is the first time I’ve been involved in a process like this, and wow is it fun.

I’ve read the advanced reader copy, and every single one of these stories is a wild 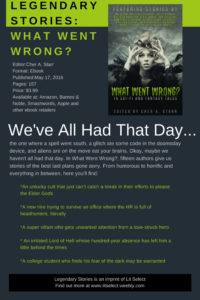 ride filled with soaring and swooping flights of imagination, all surrounding the theme of one thing or another (or absolutely everything) going off the rails for someone.

Here’s an excerpt from “Itself”:

It took up residence under the bridge not long after clawing its way out of its mother, who did her best to eat it, as she had the rest of the litter. Being the quickest, it sank its fangs into the nape of her neck and waited until her thrashing stopped.

It fed on her body it until its shell hardened.

Moving downstream, it subsisted on fish and eels before it learned to extend its sinuous front limbs, the ones with the eyed claws, out of the water. When it snatched a sleepy muskrat one still-dark morning, it discovered its taste for warm blood. Prowling the shoreline at dusk and dawn, it kept its claws motionless until a young deer or an unguarded goat drew near.

With each feeding its strength increased. Its body swelled, filling out the tough scales that enclosed it until it grew itchy and tight and hot. Rubbing against stones on the river bottom, it felt its surface splitting in places, exposing its spongy interior. By now it had found its way to the grotto under the town bridge, drawn there by the downward-drifting smells of animal blood and human sweat. Wedging its soft body into the space, it drifted into a state halfway between life and death as the water around it cooled and thickened into ice.

In spring, it awoke to the re-born river water lapping against its new, tough casing. A breeze teased its nostrils with scents of flesh, arousing in it an urgent hunger. It stretched, its body much longer now, its powerful tails scooping space for themselves in the gravelly bottom of the grotto. Above, there was movement and sound although the sun was still below the horizon. Voices rose to a bellow to be heard above the din, utterances that it discovered it had learned to decipher in the course of the winter’s sleep.

A drover bellowed insults at the pig farmer whose herd surrounded his wagon. The farmer’s reply, a marvel of obscene concision, allowed it to calibrate his position. It held its two front limbs just out of the water to sight its mark, and with a sudden snakelike motion reached up and over both sides of the bridge at once. In a flash it held a writhing pig in one claw and the farmer in another.

For a heartbeat, people and animals froze as they regarded the pig and the man hovering above them. Then the arms holding the victims whipped beneath the river’s surface, and bedlam broke out on the bridge. It was too busy eating to take much notice.

And here’s a taste of N.O.A. Rawle’s contribution, “Balancing Act”:

“Gentlemen! Just starting out on the rocky road to marriage? Want the kinks in your future smoothed out before you start?” The spindly gentleman tugged on his fine moustache for dramatic effect,“Ladies! Want to know that you and your partner will share equal footing in the house? Or know that your spouse will pull his weight?” He allowed himself a smile, but not long enough to arouse suspicion, “We all know that balance is the key to a good relationship but there’s no guarantee that you’ll get it… Or is there?My secret is right here!” He gesticulated to the large oblong box draped in purple silk. “It’s simple! Here, Ladies and Gentlemen, is the key to your Happy Ever After! Here, is what no matchmaker or priest can guarantee! But do you dare to try it?”

The crowd was now so silent that his patent leather boots could be heard as he clicked back across the wooden platform.

“I speak now only to the brave among you. Those of a sound heart! Let me introduce you to the Equilibrator! Modern science, my friends, mixed with a just the right sprinkling of magic of course, has the answer! But are you sure you want what I have to offer?”

“The Equilibrator will iron out all your differences before you even know what they might be! Lifelong attraction assured! No arguments! No Discussions! No risk! And I mean no risk, because if you are not satisfied that balance has been brought to your relationship after the first week, I personally, will refund every last penny of your hard earned cash! Yes, that’s right, you heard me correctly! If you can show me that your circumstances are not balanced, I will give you your money back.”

Learn more at GoodReads . . . Available at Amazon on May 17 . . . just in time for beguiling summer reading!