So today, a horse reminded me that life is good. Mostly. And people are good, too, mostly. Especially when they’re focused in the present moment, which they pretty much have to be if they’re hanging out with an animal that weighs 1,000 pounds. Which, it turns out, is ideal for post-election-stress healing.

I wouldn’t say things are back to normal now, since the Election Tsunami of November 8. If you pay any attention to the news or social media or the cast of Hamilton (who did NOT boo the Veep Elect, just makin’ that clear), we can’t even agree as a nation on what normal looks like anymore. Do you share with me the sense that everybody — regardless of what ovals they filled in on their ballots — is kind of tiptoeing forward into the new reality and wondering what’s going to happen next? Because, clearly, the pollsters and the pundits and the talking heads were just as gobsmacked as the rest of us and therefore all bets are off? So, normal schnormal?

It can make a person as skittish as a, well, horse. Horses, being prey animals, 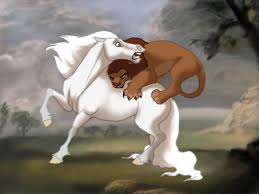 have to keep a constant balance between vigilance (lest they be suddenly pounced upon by a mountain lion or savaged by a pack of wolves) and calm (so they can conserve their energy and munch up enough grass or hay to be ready for the next life-saving maneuver). Like them, it’s natural to feel in need of a friendly, protective herd, right?

I spent the afternoon today in the company of some delightful teens who came out to Sunrise Horse Rescue — a sanctuary for abused, neglected, surrendered, or otherwise down-on-their-luck horses in Napa and surrounding counties — to meet some of the members of our herd. These young people were clients of Aldea Children and Family Services, and like our horses, their pasts haven’t been easy. Today, though, wasn’t about anything besides getting to spend some time in the company of other uniquely beautiful, vulnerable creatures and forming a connection.

After an informal orientation and review of safety rules, each teen and a 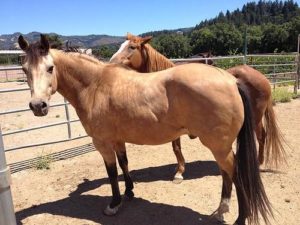 counselor joined one of the Sunrise folks and were assigned a horse to groom. A tall, graceful young lady who initially admitted to being a little nervous about the whole idea, immediately chose the horse I was handling, Ged (pronounced like “Jed” — long story). “You’ve got great instincts,” I told her. “Ged is the friendliest, kindest horse in the world, and he loves people.” Which is the truth: Ged, were he turned into a dog, would be a golden retriever.

Still, he’s a big critter with feet like small boulders. It’s a sign of intelligence to be respectful of the size and power of a horse, and clearly this girl was no dummy. But she was admirably game and willing to try. Very soon she was  currying and brushing Ged’s dappled buckskin coat, even using the technique she’d just learned to keep her hand on the big guy’s rump and her body close to his tail when she walked behind him — a counter-intuitive safety measure that requires some courage, and she handled it beautifully.

Ged, for his part, was loving the attention. His new friend learned to recognize the signs of a happy horse: lowered head, relaxed ears, soft eyes, licking and chewing in contentment. I had the pleasure of seeing a young woman’s confidence blossom. “I love Ged,” she said. Ged obviously returned the sentiment.

Elsewhere in the barn, the others were having similar experiences. For that hour,

it didn’t matter at all where any of us came from or what had gone wrong in our lives or what the latest media screaming match might be. Life was good.

And you know what? It mostly is. Happy trails to you, my friends.

What’s brightening your days during this wild and crazy time we’re all living in? Please comment!