Instead of sleeping in on Saturday morning, I board a bus heading to a town in California’s Central Valley with other volunteers with the CA Democratic Party to  canvass a neighborhood and register voters. I don’t think of myself as a political activist, but like a lot of folks since last fall, I feel called on to do my part. I phone my congressional delegation a lot. I have my state senator and assemblywoman on speed dial. I go to meetings. I’ve organized a few letter-writing parties.  I do what I can. On this Saturday, this is what I can do.

I’m with about 50 of my compatriots, most of them women somewhere around my age. There are a few folks in their 20’s, and a total of four men if you include the bus driver. Maybe the Dalai Llama is onto something. 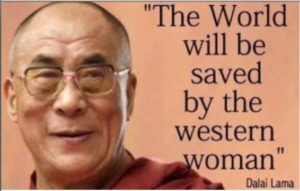 Everyone on the bus has a turn at the mic to introduce themselves. Many are with their local Indivisible or Rise Up or similar group. Lots of us are veterans of the Women’s March on January 16. Some of us are complete newbies; others have been on the front lines for decades. One woman with a glorious shock of silver hair tells us that at her elementary school’s mock election she was the fifth grade campaign chair for McGovern. Why we have each chosen to spend our Saturday this way is best summed up by the woman who says, “This is what waking up appalled every morning has driven me to.” All of us are here to channel our energy into something positive. 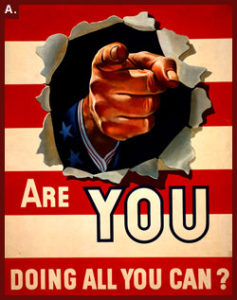 After a three hour trip we arrive at a private home where we are given snacks, bathroom access, and training. We’re paired up with buddies, grouped with drivers, and sent out into our assigned neighborhoods to find out how folks are feeling about the Trump administration, what issues they’re most concerned about, how they feel about their current House representative (in this case, a guy who has a straight-down-the-line Trump agenda voting record, despite his narrow margin of victory in the most recent election and his seat in a moderate district), and if they’re currently registered to vote. If not, we can help with that. 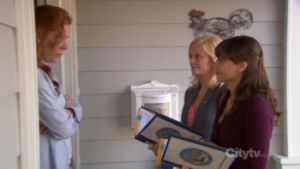 It’s a little daunting. My buddy and I are given a series of long blocks in a decidedly working-class neighborhood. People here, like everywhere, have precious little free time as it is and don’t necessarily want to spend any of it talking to us. At many houses, there is nobody home; at others, we can tell someone is inside but they choose not to come to the door. Our favorite household in this category is the one where the occupant answers our knock by yelling, “There’s nobody here!”  I can’t blame him, really. How does he know what we want with him? 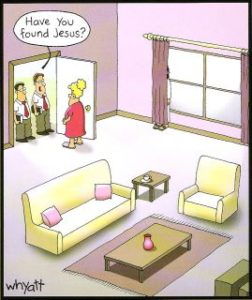 But there are many houses and apartments where people are amazingly generous with their time, willing to interrupt whatever they’re doing to talk to us. Most of the folks we chat with are not at all happy with Trump, even if they’re Republican and voted for him. Only once are we snarled at by an elderly, cane-wielding man who barks, “I hate Democrats! Don’t even talk to me! Donald Trump!” We wish him a good day; we learn a lot from all of these conversations, even the less encouraging ones. My partner and I don’t find any unregistered voters, but we do sign up one woman to receive ballots by mail. In this ethnically diverse neighborhood, we learn that people are pretty freaked out by issues like immigration, health care, and what they see as the corruption of our country’s values. We hand out a few information sheets that explain peoples’ rights should they be visited by ICE. 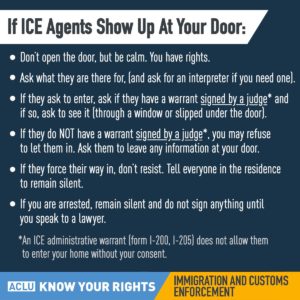 At 2PM we return to the house that serves as headquarters, where we turn in our paperwork, are quickly debriefed, and fed a tasty box lunch. We’ve lucked out on the weather; it’s warm but not hot, with a delicious breeze. Next week it’s supposed to hit over 100 degrees here, as it often does in this part of the Central Valley. I am ever so grateful we’re not doing this next week.

At 3PM we climb back on our bus where we are offered wine and a chance to share our stories. The crowd favorite is from the woman who found herself speaking to an elderly man through his open kitchen window, which wouldn’t be so remarkable except that the man was stark naked.

The crowd on the bus radiates a shared sense of cheer, satisfaction, and determination. When one of the organizers takes a group photo we shout, “2018!” But there is a certain amount of head shaking as well. We’ve all encountered people who see themselves as completely disconnected from the politics that affects their lives.  And there are many who know so little of the basics of our system of governance that they don’t understand what rights, power, influence — or even obligations  — they do have as citizens. Makes you wonder how a representative democracy is supposed to function when the governed are  uninformed, overwhelmed and misled to the point where they simply turn off? It’s as if  as they hope to  somehow insulate themselves by refusing to engage.

But my compadres on the bus, and enough of the folks we spoke to to keep us hopeful, are definitely engaged. We agree we are in this for the long haul. As something of an introvert, spending a day talking to strangers runs down my batteries. But I’ll do it again when the chance comes up.

As long as the people I talk to are wearing clothes.